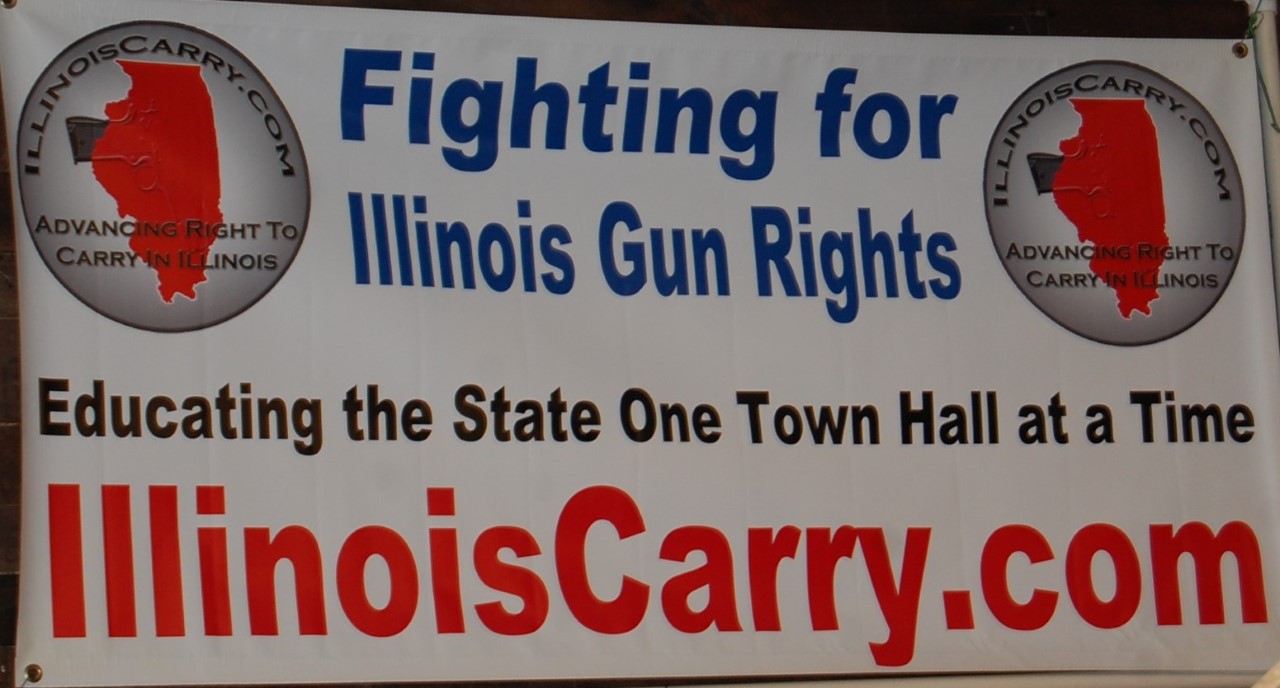 Over a hundred concerned citizens turned out Monday evening for the Second Amendment Town Hall meeting in Carmi.  The meeting was sponsored by IllinoisCarry.com and the Carmi Rifle Club. People came to hear from their current state senator and candidate for governor Darren Bailey about things that are going on in Springfield.  Sen. Bailey stated he is an advocate for eliminating the Firearm Owner Identification card (FOID) on the basis he believes it is unconstitutional to require law abiding citizens to purchase a permit in order to possess a firearm.  He explained his support for Constitutional Carry and doing away with the state requirement to pay for a license to carry a concealed firearm for self-defense.  He gave an update on the current legislative session in the IL General Assembly, urging attendees to be active in calling legislators and filing witness slip in support or opposition of bills being heard in committee. Sen. Bailey discussed what we can do to ensure fair elections such as signing up to be election judges and poll watchers. “We need concerned people to help fill those positions all over the state”, Bailey said and added “We need people to get involved in their local and county offices”.

Valinda Rowe of IllinoisCarry presented some of the recent changes in the FOID/Concealed Carry law including new provisions for private sales, concealed carry while hunting, voluntary fingerprints for FOID and more. Some of the topics covered were:

White County State’s Atty. Denton Aud gave a prepared statement concerning the new No Cash Bail law due to go into effect January 1, 2023.  It is a complicated law that Aud believes will make our communities less safe.  The measure was opposed by one hundred of the 102 IL State’s Attorneys and passed through the General Assembly on a partisan Democrat vote.  The new law will cripple law enforcement’s ability to detain violent criminals who will have to be released without bail almost immediately. This basically removes crime deterrents as perpetrators will not be able to be held for even the most serious crimes such a rape of a child or even murder.  There is a small hope that the law will get come common sense amending after the November elections but no one knows if that will happen or what the changes might look like.   Aud plans to do a press release with his statement soon.

Valinda Rowe and husband Mike Rowe agreed with Aud that communities will be less safe with the no cash bail law. They discussed and answered questions about IL Justified Use Of Force Law.  The discussion covered when you can legally use lethal force in protection of persons, dwellings, and property.  It was urged that while the law might allow that force, it is always better to try to avoid it and not have to deal with all the legal and emotional issues that will have to be dealt with after such an incident.

Rounding out the evening, Valinda Rowe discussed the upcoming proposed constitutional change known as Amendment 1 on the ballot in the fall.  It is the first of its kind in the nation and would allow collective bargaining to supersede law.  She expressed concerns that collective bargaining could very possibly effect the Second Amendment right to keep and bear arms in the work place or parking lots of those work places or could allow anti-Second Amendment curriculums in Illinois schools.  The amendment would tie lawmakers’ hands and thereby tie the hands of Illinois citizens when trying to protect constitutional rights that could be threatened.  “Giving this is unheard of broad power to bargain away our rights will be a dangerous precedent in this state,” Rowe said.

The town hall meeting wrapped up with a series of questions and answers for the panel of speakers.