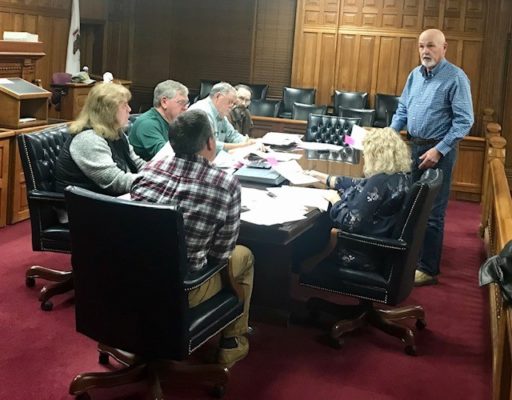 It wasn’t a long meeting Tuesday night, but the White County Board gathered for their February meeting from 7 to 7:30pm.  Board member Clint Spencer was absent as he’s in Springfield working on the New Harmony bridge project.

The only county officers present at the meeting were County Clerk Beth Sell, the Circuit Clerk Kelly Fulkerson, Ambulance Director Adam Allen, Highway Department Director Brian Ray, and Coroner Chris Marsh.  If transparency is what you expect from government officials, the public only received it from Sell, Fulkerson, Allen and Ray as the others including the County Treasurer, States Attorney, Sheriff, Supervisor of Assessments, EMA, and TB officer were silent by absence or provided reports to Board members which were never read aloud or discussed.

For Fulkerson’s part, she was there and told those in attendance…

Allen says the ambulance showed a profit of more than $10,000 for the month of December and January is “looking good.”  We also learned last night that Sheila Headlee will take over as the Jail Administrator in March when Byrd Huber retires in mid March.  She’ll step down as County Board Secretary following last night’s meeting.

The county board will also be setting salaries and considering raises for all elected officials in the coming months.  Board chairman Don Puckett brought it up last night, but other board members didn’t dare touch it at the moment.  Puckett, however eventually got around to suggesting a raise…

Fuel bids were accepted at last night’s meeting…Wabash Valley was the only provider to submit a bid.  The board decided to go with firm bids which will hold the dollar amount rather than gambling that the open price bids submitted may be cheaper or higher.  Despite reflecting the 19 cent tax increase, prices didn’t increase notably and in one case even went down two cents.

Mike Frashier’s resignation as a Rides Mass Transit Board member was accepted.  He’ll be replaced by Chris Birkla.

Stan Hill, a rural Norris City resident spoke up toward the end of the meeting urging the county board to get involved, saying that White County was missing out on money available for rural broadband access.  He brought paperwork showing the county had already missed out on an FCC release of more than $116 million dollars.  Those improvements are instead being made in Gallatin, Hardin, Johnson, Pope and Saline Counties.  Furthermore, Hill says he reached out to both regional representatives, Darren Bailey and Dale Righter, more than a month ago to ask what they’re doing to make sure that White County gets a share of monies available to bring broadband and hasn’t heard back.  He hoped the board would draft a letter to send to Bailey and Righter in the hopes the county wouldn’t be left out again.

Brian Tomm, who says he owns two businesses in White County, echoed Mr. Hills statements saying the lack of broadband “significantly impedes our ability to work efficiently.”  Puckett said, “we’ll see if we can get some of this money”.

The county board will reconvene on March 10th at 7pm at the White County Courthouse.