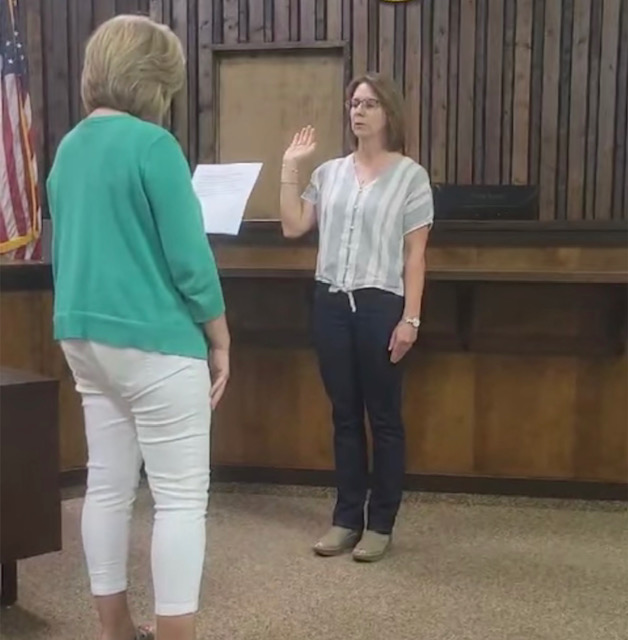 The resignation of Ward 3 Alderman Dale Biggerstaff was approved as he accepted a new job in Brentwood, Tennessee.  Speaking by phone, he apologized for resigning so abruptly, but it was an opportunity he couldn’t pass up.  Biggerstaff talked about how much he enjoyed his time on the board and thanked everyone he worked with, and offered to help with any unfinished business he may have left behind.

Then Sharon Bowman was approved to fill the vacancy of Biggerstaff’s unexpired term, which runs until 2023, and was sworn in and seated on the board.

There were several visitors in attendance.  The attorney representing Andrea Chamberlin of Accel Entertainment, spoke to the council about a beer and wine liquor license and a gaming license. It would be for a business on the property Leon Russell of Russell Oil Company was looking to purchase later in the council meeting.

Calvin Booth of Flo’s Gaming also spoke about a beer and wine liquor license and a gaming license for a gaming parlor at the McLeansboro Shopping Center and hoped to hire four to seven full time employees.

Susana Mills of the Girl Scouts pitched allowing them to use the Izaak Walton Cabin to hold meetings there at no charge.  She said she is willing to work with the council members on a schedule when the Cabin would be available.

Zoning administrator Pat Stevens presented the Zoning Report.  There are several properties that are available for the city to purchase, but two of them are occupied.  She said it was up to the council to decide if they would be willing to evict them.

The committee appointments put together by Mayor Chad May were approved.  He said it wasn’t written stone as there may be some special committees needed from time to time.

The council agreed to let the Girl Scouts use the Izaak Walton Cabin for their meetings at no charge twice a month and work with the city on the schedule.

Brian Fulkerson was granted permission to use Lake Mcleansboro for a catfish tournament on July 10th from 7 AM to 3 PM.  Fifty percent of the payout would go to the Allie Brown Fund, as she is battling cancer.

Action on final approval of the sale of property on North Virginia Street to Leon Russell failed due to lack of a second.

They decided to not renew the technology support agreement with Wilson’s computers and explore other options.

The three year non-regulated vendor agreement between Wabash Area Development and the City of Mcleansboro was approved.  Also approved was a $500 donation to the Kiwinas Club for the Fall Festival.

And accepted was one of two proposals, from Andrew Blackwell of Mcleansboro to update the city’s website for no fee, as he had done work with them previously.  The revenue they generate will be put into photo and video work.  The other proposal was from Serpentine Solutions of Carmi.

The next monthly meeting will be held on Tuesday, July 13th.