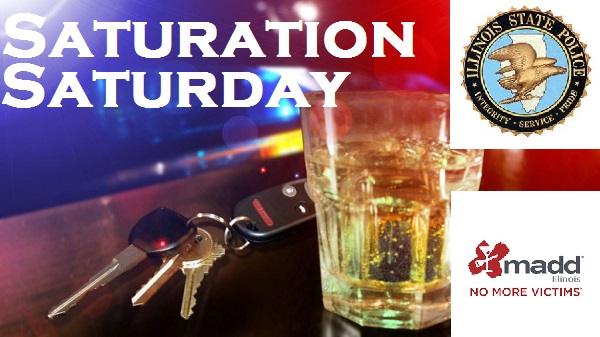 CHICAGO – The Illinois Department of Transportation shares a common goal with Mothers Against Drunk Driving and Illinois law enforcement – to eliminate impaired driving. As the unofficial end of summer approaches, MADD, IDOT, the Illinois State Police and law enforcement agencies throughout the state are teaming up for “Saturation Saturday” on Aug. 29 to remind motorists that driving under the influence of drugs or alcohol is a dangerous crime.

“Driving under the influence of alcohol, marijuana or any other drug or impairing substance is simply not worth the risk,” said Cynthia Watters, IDOT’s bureau chief of Safety Programs and Engineering. “Luckily, it’s a risk that’s easily avoided by planning ahead for a sober ride home. Make the right choice. It’s literally a matter of life or death.”

While impaired driving fatalities have declined steadily the last two decades, crash data shows that more than 300 individuals still die in alcohol-impaired crashes in Illinois each year. Drug-impaired driving is a growing concern, with cannabis and other drug-involved motor vehicle crash fatalities on the rise.

“Impaired driving has brought tremendous tragedy upon families and has taken far too many innocent lives over the years,” said ISP Director Brendan F. Kelly. “Our goal is always voluntary compliance, but the public should expect strict enforcement of impaired driving laws, not only on Saturation Saturday, but every day of every week on all Illinois roadways.”

“Saturation Saturday” was created two years ago by MADD’s Illinois chapter. During this annual event, ISP, local police and sheriff’s departments step up enforcement to keep impaired drivers off Illinois roads. The goal is to save lives by reminding motorists that driving under the influence is a serious crime with sobering consequences.
“Now, more than ever, our heroes in law enforcement need MADD’s support and encouragement to continue the fight against drunk and drugged driving,” said John Walker, executive director of Mothers Against Drunk Driving Illinois. “Drunk and drugged driving has not stopped during the pandemic. We need to support law enforcement to help end drunk and drugged drivers in Illinois.”