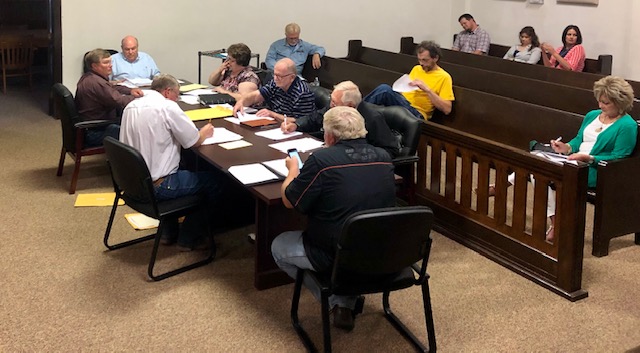 The Hamilton County Board gathered for their monthly meeting Tuesday night following a Liquor Commission update.  For 10 minutes following officially seating John Mead to take the place of Chad May following his election as McLeansboro mayor, the board worked with Sheriff Tracy Lakin on courthouse windows and frames and also his department’s vehicle fleet situation.  Lakin is tasked with seeking bids for the many windows and frames that are in dire need of replacement.  Additionally, his department is down a vehicle.  Given the delays in manufacturing vehicles due to the pandemic, the board agreed to move forward with repairing the one with engine trouble.

The ambulance service situation in the county is potentially even more pressing as the current agreement between Harre and the county is coming up at the end of June.  Chad May who has played a major role in facilitating a non profit being formed to sustain an ambulance service for the county.  May says the state has been fighting tooth and nail the tax exempt status, but it appears there’s been a breakthrough given that the board pass an ordinance with the right language.  Chad May and Bellwether Administrative Services Bruce DeLashmit have details.

It appears no matter how swiftly the board and state act, the board will have to seek an extension with Harre Ambulance at least on a month to month basis until the proper paperwork is handled and the new county ambulance service can be launched.  May says he foresees the county needing that extension through at least July 31st.

The county also intends to work with the city thanks to their close relationship with the new mayor on animal control.

Other news from the board meeting included a report from Dr. Beth Rister, Regional Superintendent of Schools; the board approved a resolution for Drug Court Fees; and the board also discussed the planting of some new trees on the courthouse.  They determined it would be best to wait until after the Fall Festival to ensure any new plantings aren’t pummeled or destroyed by crowds.  Mr. Terry Wheeler from Wheeler Tree Farm agreed to donate the trees and labor, according to board chairman John Chapman.

Board adjourned around 7:30pm.