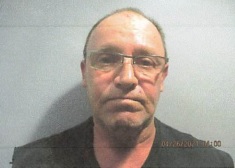 A 55 year old Crossville man is behind bars after a group effort of law enforcement corralled him Monday evening.  Crossville Police say they attempted to serve an arrest warrant on Sherman Hilborn at his home on Main Street.  According to the incident report, Hilborn resisted in the driveway and eluded officers into his home.  A White County Sheriff’s Deputy and Carmi Police Officer were called in for backup.  After some time, Hilborn emerged from the bathroom he’d locked himself in and he was taken into custody the report alleges.  In addition to the Failure to Appear Warrant on a charge of unlawful possession of Meth that dates back to 2019, officers also have charged him with Resisting Arrest.  Moreover, officers say they found a bag of meth and a “snort straw” in the bathroom leading to a fresh charge of Possession of Meth and Drug Paraphernalia.  Court records have yet to be uploaded this morning indicating when he’ll next be due in court.  Hilborn’s bail has been set at $500.