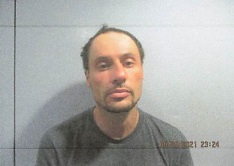 A Carmi man who was just in the news Monday is back behind bars following an incident yesterday (Wednesday) afternoon.  Carmi Police say they’ve arrested 35 year old Jason Keith Ballard once again, this time on 3 White County warrants.  On Monday, Ballard was in the news after being charged over the weekend for making a false stolen vehicle report, driving on a suspended/revoked license and driving without proper registration.  Wednesday, police say they observed him working on a white Ford SUV on Williams Drive and Ballard allegedly fled when officers approached.  Law enforcement including Carmi PD and White County Sheriff’s authorities converged on the property surrounding him and made contact with the individual who lives at the residence.  She confirmed Ballard was hiding inside.  The woman then allowed police inside and Ballard was taken into custody without further incident.  The report indicates the warrants include 2 felonies and a misdemeanor.  Online court records, as of Thursday morning, haven’t been uploaded to reflect specifically what those charges are in reference to.  Ballard remains behind bars at the White County Jail with $3,250 bond required for his release.  He’s due in court next on June 17th. 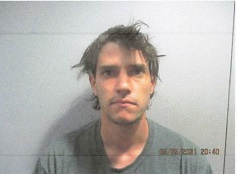 A McLeansboro man is free on bond following her arrest in Carmi Wednesday morning.  Carmi Police say they found 28 year old Cory Odonnell in the parking lot at Pundrakes at around 11:26am.  Odonnell was taken into custody on a Driving While License Suspended warrant out of Hamilton County and additionally charged with a new count of Driving While License Suspended.  Odonnell posted the $750 cash bond plus $20 booking fee and was released a short time later.

Also Wednesday, around a quarter after 6pm, Carmi Police pulled over 40 year old Melissa Rustin of Steven Street.  Rustin was pulled over near the intersection of Kerney and Church.  That traffic stop resulted in authorities finding Rustin was driving on a revoked license.  She bonded out to the tune of $250 cash plus booking fee less than an hour later.  Court records haven’t been updated as of Thursday morning indicating when she’s next due in front of a judge.