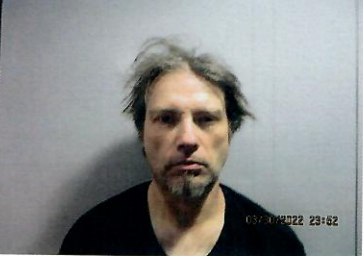 On Thursday afternoon, during a patrol in North Carmi along Shipley Street and Fifth Street, a White County Sheriff’s Officer observed a man getting on a bicycle in a backyard at the corner of Fifth and Shipley Street. He pulled a cloth up high on his face and looked away from the officer. The officer slowed down, and as the man was riding the bike in the grass along Shipley headed eastward, the officer attempted to engage the subject in conservation.

The man said his name was Jason Townsend, of 500 Schumaker Street in Carmi, and it was discovered that he had an active arrest warrant. Townsend then picked up speed and turned south onto Second Street. After the officer got into his squad car up to close in on Townsend’s location, Jason drove off the roadway on his bike. He then cut through a residential yard and across another lot, dropping a new two liter of soda he was carrying and didn’t try to pick it up. The other officer in the squad car went after Townsend, who went southbound down the alley on his bicycle, on foot. Townsend then crossed Maple Street and continued southbound before finally being caught up to by the officer. Townsend was ordered off the bike, but refused and seemed confused. Once he was helped off the bike, the officer took a white plastic sack and a back pack off of Townsend. Four other officers then arrived on the scene to assist.

When asked what was in the white plastic sack, Townsend said he had been over at a friend’s house and helped them pick up trash out of their yard. The reporting officer put on rubber gloves and untied several layers of white plastic bags, noticing two glass smoking pipes inside the bags. He field tested the smoking pipes and they tested positive for methamphetamine once back at the Sheriff’s office.

Jason Townsend was placed under arrest for the arrest warrant, possession of meth $500 cash, and taken to the White County Jail. He was also charged with fleeing or attempting to elude a police officer, possession of meth and possession of drug paraphernalia. The bicycle was taken up to the Sheriff’s Department and put in the Sally Port area. Townsend is being held without bond.