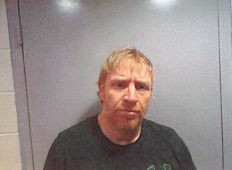 A Saline County man is behind bars after Carmi Police say he attempted to fraudulently return items at Tractor Supply and subsequently fled.  According to reports, 43 year old Joshua Gibbs of Harrisburg was arrested just before 9pm Wednesday night after authorities were called to the store.  Officers allegedly gave chase when Gibbs attempted to flee the scene and then gave officers several false names leading to his arrest for obstructing justice.  Once identified, law enforcement say they found Gibbs was wanted on 8 warrants for various offenses.  He’s being held on felony charges of obstructing justice, possession of meth, and felony warrants out of both Franklin and Saline Counties.  Additionally, Gibbs is being charged with misdemeanors of theft under $500, Obstructing ID, and Possession of Drug Paraphernalia.  The Saline County warrant dates back to a February of this year charge for Possession of Meth and Driving on a Suspended License.  The Franklin County warrant is related to charges that date back to August of 2021 and surround alleged criminal damage to property and theft of up to $10,000.