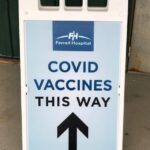 A partnership between Ferrell Hospital and the Army National Guard wrapped up it’s third community vaccine clinic Monday afternoon and by all accounts, it seems it’s been a success.  Sergeant Brian Ratulowski, NCOIC for the National Guard says his team, made up of 18 National Guard members have now carried out vaccination clinics at 10 sites.  They have it down to an art at this point.

Between the 2 clinics that were held in Eldorado last week and the one in Carmi, more than 900 vaccines were given.  While the number is important, Ratulowski says for his team’s part, that’s not how they gauge whether it’s been successful.

Those that were able to get vaccinated Monday in Carmi were given the Johnson and Johnson vaccine that only requires a single shot.  Ratulowski, a 12 year National Guard member says the coordination between sectors has been great to see.

Lacey Harms, Senior Business Development Coordinator for Ferrell says working together in that capacity has made a huge difference for Ferrell and also the general public.

Nearly 350 vaccines were distributed Monday, made up of 272 appointments and about 75 walk ins, according to Harms.  Future vaccine opportunities can be found at the following link… https://www.wrul.com/local-news/vaccine-opportunity-update/?fbclid=IwAR3HKAZZefLH57kYohBey7R392x7iTAErRvuICOVDFfKYnD5Xf-0vhuhLuM