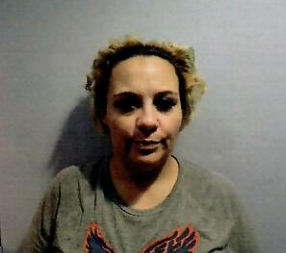 A Wayne County woman wanted out of Clay County was nabbed by Carmi Police Friday afternoon.  32 year old Jennifer Morris, with addresses in both Xenia and Barnhill, was spotted just prior to 5pm by authorities driving a black Nissan Altima and pulled over.  A check of the license plate revealed it was registered for a 2007 Dodge van.  Upon Morris’ exit of the vehicle, the officer notes in the report he smelled a strong odor of cannabis and noticed a small wooden “one hitter”.  At that point, Morris allegedly stated she had a suspended drivers license.  When running Morris through dispatch, it was discovered not only did the woman have a suspended license, but also she was wanted out of Clay County on a failure to appear warrant attached to a Possession of Meth charge.  She was subsequently arrested and taken to jail where she was searched more extensively by a female corrections officer.  That search revealed contraband that tested positive for meth according to the report and was found in Morris’ bra.  Morris is behind White County Jail bars, facing charges of Possession of Meth, Driving While License Suspended, Possession of Cannabis in a Motor Vehicle, Unlawful Use or Possession of a Title Belonging to another Vehicle, and Possessing or Knowingly Bringing Contraband into a Penal Facility.  She’s also being held on the Clay County warrant with a total of $1,750 required for her release.