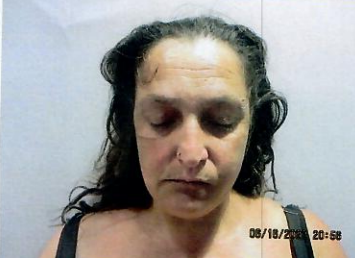 A call from concerned citizen in regards to an erratic driver ended in the arrest of a Grayville woman following a high speed chase. On Friday, June 17th at around 11 a.m. Deputy Capeheart with the White County Sheriff’s Department was dispatched to a hit and run between Crossville and Carmi. The caller stated that a Black Mercury passenger car had pulled over at the old rest stop and was doing donuts and driving dangerously. They stated that the female driver then backed into a Campbell’s company truck. As Capeheart was headed to the scene he was contacted by Grayville Police Chief Bobby Hatcher who was on his way back to Grayville from Carmi and said he had located the vehicle however when he tried to make a traffic stop, the driver refused to stop. Hatcher said that he was able to identify the female driver who was 42 year old Evelyn J Morris of 106 S Main Street in Grayville. Capeheart then met Hatcher and the vehicle south of Crossville on IL Route 1 and attempted to make a traffic stop. Morris then pulled into a field, backed out onto the highway, then headed south again quickly reaching a speed of 85 mph. Morris was splitting the two lanes of traffic forcing both lanes of traffic off the highway to avoid a collision. While in pursuit an officer with the Carmi Police Department set up spike strips at the Carmi city limit sign and waited for the vehicle. Morris begin driving even more recklessly, leaving the roadway to avoid the strips. Another set of spike strips were set up West of Crossville city limits. Morris got to the strips and slowed down. Realizing she had nowhere, she accelerated and drove over the spikes and ended up running into a ditch. Morris continued to try and get away with flat tires heading towards Crossville. When Morris finally stopped she exited the vehicle and was ordered to get on the ground, but she fled instead. After a brief foot chase, an officer took Morris to the ground. She briefly resisted, but was eventually placed into handcuffs and transported to the White County Jail.  Morris racked up multiple charges and is being held in the White County Jail until her hearing on July 26th.