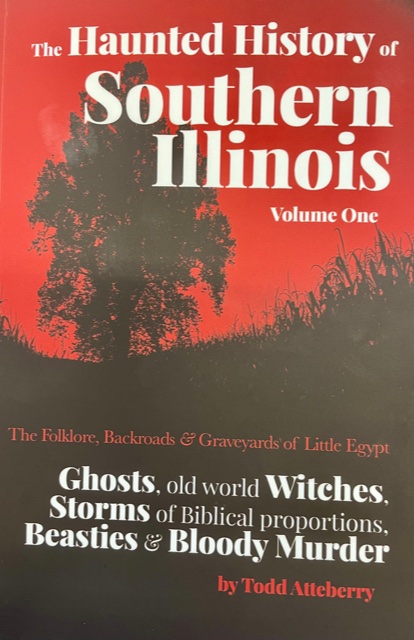 A new book, The Haunted History of Southern Illinois explores ghosts, old world witches, storms of Biblical proportions, beasties and bloody murder in Little Egypt A 200 page road trip into the haunted and the bizarre from southern Illinois, and the history that goes along with it.  Not just a collection of spooky stories, it’s a search for the truth behind the tales, and why the people believed them. Each essay by written by Carmi native Todd Atteberry, takes a deep dive, collecting folklore, history, newspaper accounts from the times, and the author’s own experience in this mysterious and misunderstood region.What emerges is a portrait of the people who came before us, warts and all. Stories range from Illinois’ first ghost story, in Hamilton county, to a witch sentenced to be burned at the stake in St. Clair County, to a forgotten witch in White county that turned out to be the author’s kin.The more than twenty five essays in the book cover everything from monster sightings and murders, to UFOs and the sacred sites of the native Americans who used to live here.In keeping with the season, there’s a chapter included on Christmas ghost stories and traditions from southern Illinois. As a travel photographer, specializing in historic locations, Todd is used to wandering in forgotten places, looking for where history happened. As the grandson of a gravedigger and storyteller, and growing up in a haunted house, writing about the supernatural was a natural progression.“Old places tend to have ghost stories. Mothers and grandmothers were the prime culprits in telling these tales, to keep their children close to home. And even though they borrow heavily from folklore, most contain some truth. Over time, these beliefs become our history.”“I found myself wandering the woods and rivers, tracking down sketchy tales of Bigfoot, the Big Muddy Monster, Enfield Monster and Big Jim the Rattlesnake, a twenty foot long beast which roamed the banks of the Little Wabash in the 1880s. Not to mention the human monsters, like you find at The Old Slave House.”Some of the essays make the case that sordid behavior, murder, mob violence and racism aren’t new issues, but have been here all along. It’s not always the prettiest history, but it’s southern Illinois’ history.The book is available from the author’s website, as well as Amazon. It comes in two editions, either color or black and white, with over a hundred photographs taken by the author. A digital version is set for a December release.ABOUT THE AUTHOR: Todd Atteberry explores the history behind the folklore and the supernatural through his unique photo essays. He holds no degrees of any sort, but can sniff out the best pint in countless haunted locations across the United States and Europe.The Haunted History of Southern Illinois is his second book, with Haunted Travels in the Hudson River Valley Of Washington Irving being published in 2020.With an unhealthy attraction to things dark and mysterious, Todd travels to places where something ghastly has occurred, “which results at times in the sudden realization that I’m sleeping in a bed where a hundred years ago, the former occupant died and has been seen periodically since.” His travel photography and essays are documented in Witchery Arts a.k.a. A Gothic Curiosity Cabinet, a catalog of his excursions, gothic ghost stories collected over the years, history, paganism and of course, witches. “I grew up in a haunted house and had my own ghost following me around when I was younger, so there was never a question of did I believe. I may not know what these things are, but I know they’re there.” In addition to a number of book covers, his work has also been featured in, The Smithsonian, The New York Times, The Boston Herald, BBC, The Guardian, CNN, MSNBC, Broadway World, Indianapolis Post, NY Daily News, Fodors, Country Living Magazine, House Beautiful, Good Housekeeping and AMC. He’s also worked with The Daughters of the American Revolution, The Civil War Trust, Plimoth Plantation, History Press, Algonquin Press, Black Cat Press, Historic Hudson Valley, The Old Dutch Church of Sleepy Hollow, Philipsburg Manor, Horseman’s Hollow, Sunnyside, SmugMug, Willard Library and The Stony Brook Environmental Conservancy, to name drop a few. MORELinksPress kit/images click here: https://www.gothichorrorstories.com/uncategorized/press-kit-haunted-history-of-southern-illinois-by-todd-atteberryBook Page: https://www.gothichorrorstories.com/product/order-now-and-save-the-haunted-history-of-southern-illinois-the-folklore-backroads-graveyards-of-little-egyptExcerpt: https://www.gothichorrorstories.com/haunted-travels/ohio-river-valley/book-excerpt-christmas-ghost-stories-on-the-prairieWebsite: https://www.gothichorrorstories.com