Through his hard work and dedication to public safety, Trooper Ross Rafferty has been selected as the “2016 Trooper of the District” at Evansville. Rafferty received his award earlier today at the Indiana State Police Spring Award Ceremony held at the Indiana Government Center in Indianapolis.  This award is presented to the Trooper at each district who has achieved outstanding enforcement efforts in the area of traffic and criminal enforcement, case and crash investigation, public information programs and community service, and who has exemplified the professionalism and integrity expected of an Indiana State Trooper. 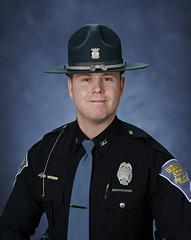 Rafferty is a four-year veteran and is currently assigned to the Evansville District All Crimes Policing Unit, which primarily concentrates on drug interdiction and DUI enforcement.

During 2016, Rafferty arrested 133 individuals on 212 various criminal offenses, 49 of which were felonies.  He also initiated 1,011 traffic contacts and arrested 18 impaired drivers. He primarily patrolled Gibson County during 2016. Rafferty also serves the district as a Field Training Officer and a Standardized Field Sobriety Test Instructor.