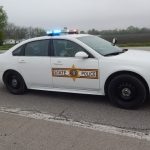 The number of unrestrained drivers killed in traffic crashes is significantly higher at nighttime and
combined with impaired driving means even more traffic deaths during these critical hours.
Officers will strictly enforce violations including:
– Driving Under the Influence (DUI);
– Safety Belt and Child Restraint use;
– Speeding;
– Distracted Driving; and,
– All Illinois Vehicle Code and Criminal Violations.

Alcohol and drug impairment is a factor in more than 30 percent of all fatal motor vehicle crashes
in Illinois. Over half of all fatal crashes in Illinois occur at night. The NITE program allows
officers to work even harder at removing dangerous impaired drivers from the road and making
sure everyone is buckled up. This project is funded through the Illinois Department of
Transportation.