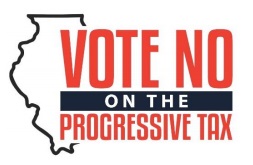 A statewide coalition of business groups is launching its push against the governor’s proposed progressive income tax. The proposed amendment to change the state’s flat income tax to a progressive structure with higher rates on higher earners is on the November ballot for voters to decide. Opponents say the tax increase will hurt small businesses.

According to a press release issued by the combined efforts of the Illinois Chamber of Commerce, Illinois Farm Bureau, National Federation of Independent Business-Illinois, and Technology and Manufacturing Association, leaders of the coalition held simultaneous press conferences at four locations throughout Illinois among the very people this tax would hurt most: small businesses, farmers, manufacturers, and workers.

They say their message was heard loud and clear:

Illinoisans are already overtaxed. Families, workers, seniors, and small business owners struggle under the weight of the highest overall tax burden in the entire country, yet politicians in Springfield are trying to hike taxes again. The progressive tax will do nothing to address our skyhigh property taxes; will cost jobs, slow wage growth, and hurt Illinois workers; and will end up raising taxes on the middle class and the working poor. Illinoisans can’t afford another tax hike, especially as working families and small businesses struggle to recover from COVID-19.

Illinois Chamber of Commerce President Todd Maisch said, “The progressive tax increase is the same thing as leaving a huge bag of taxpayers’ cash at the backdoor of the statehouse and city hall. None of the money is dedicated to
property tax relief, increased funding of education, public safety or pension debt relief. Politicians arrogantly
demand that hard-working taxpayers trust them to spend the money wisely. We don’t.”

Illinois Farm Bureau President Richard Guebert, Jr remarked, “What this new progressive tax will actually do is take us
down the same route that these proposals have gone in other states. To cover all of Springfield’s spending and
debt, the tax brackets and rates will have to be changed to raise taxes on the middle class and even the
working poor, with higher rates starting at incomes as low as $25,000 per year. So while proponents claim the
progressive tax would only tax ‘the rich,’ many of whom are local leaders like family farmers who are investing
in their communities and creating jobs, the truth is that this amendment will open up every Illinoisan to tax
increases.“

National Federation of Independent Business Illinois Leadership Council Chair Cindy Neal commented, “Let us not forget that Illinoisans already pay the 2nd highest property taxes in the nation, and these local taxes increase every single year. We pay three to four times the property taxes of our neighbors in Indiana and Wisconsin, and our taxes
go up every year even though property values are stagnant. This progressive tax will do nothing to address our
biggest problem in Illinois: our sky-high property tax burden. It simply piles additional taxes onto already
overburdened Illinois taxpayers. All of these taxes have serious and real-life consequences for our families and
small businesses, especially as we struggle to recover from COVID-19.”

Technology and Manufacturing Association President Steve Rauschenberger noted, “The progressive tax will cost jobs, slow wage growth, and hurt Illinois workers when we’re already facing the highest unemployment since the Great Depression due to the coronavirus. Our Illinois economy continues to lag our neighbors and the rest of the
country because of high taxes. The progressive tax will further hurt our economy, costing Illinois up to 286,000
jobs and $43 billion in economic activity. This means fewer jobs for Illinois workers, slower wage growth and
higher costs for families, and less opportunity for our children at a time when we can least afford it.”

About the Vote No on the Progressive Tax Coalition:
Leading small business and pro-taxpayer organizations from throughout Illinois have formed a grassroots
coalition to defeat the Progressive Tax Amendment because Illinoisans are overtaxed. Families, workers,
seniors, and small businesses struggle under the weight of the highest overall tax burden in the entire country.
Illinois’ Progressive Tax Amendment proposal does nothing to address our sky-high property taxes, will cost
jobs, slow wage growth, and hurt Illinois workers, with the result being a tax increase on the middle class and
the working poor.