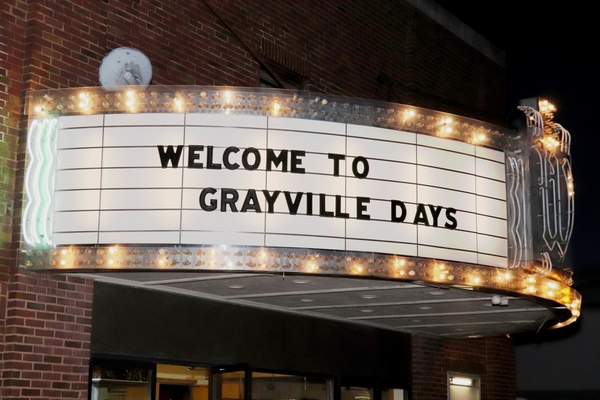 An exceptionally awkward silence that would last over 3 minutes if not for a few occasional utterances spread across the small chambers in Grayville Monday evening.  The apprehensive quiet spread as it was learned that someone had put the cart before the horse.  And in that cart was a $15,000 check.  Immediately following the Pledge and roll call, Mayor Travis Thompson called for approval of the consent agenda.  That’s when senior commissioner and head of finance David Jordan posed the question, “when did we approve the transfer of $15,000 from motel tax to Grayville Days?” to which Mayor Thompson replied, “It’s on for tonight under new business.”
The rank and file members had no response leading city attorney Jay Walden to intercede with, “Well instead of sitting here half the night, my recommendation would be one of two things.  Either you approve it subject to consideration of that transfer or you defer it and consider the Grayville Days [donation] as part of the agenda and then consider the consent agenda.  But I’d just as soon not sit here all evening and stare at each other.”
Twenty seconds more and Commissioner Tyler Howell would move to defer the consent agenda until later in the meeting after they’d tackled the agenda item.  A bit later, Sherry Funkhouser spoke on behalf of the Grayville Days Committee.  She says they have their 501c3 Articles of Incorporation, are finalizing their by-laws, and are in the process of setting up their FEIN.  She says the plan is to move forward with a scaled down version of Grayville Days on Saturday, September 5th; a one day event instead of being spread over three days. Entertainment is planned and is expected to consist of Brittany Lloyd, Jason Sturgeon, and headliner Orry Kraw after the fireworks.
Later in the meeting following an executive session to deal with another matter, the time had come for discussion and a decision from the board.  Jordan led with,“I’m not opposed to Grayville Days at all.  $15,000 is what we spent for a 3 day festival last year.  I have a real problem with committing $15,000 for a one day event.  I’m just being honest.  If we’re compacting it that much, I hate to see us take that much out of the Grayville Days account and if you guys want to do something later this fall, the money might not be there if you come up with another project you want to do.”  Additional questions and answers surrounded the actual expenses of the biggest pieces which include approximately $8,000 for the fireworks and $5,000 for the entertainment.  There wasn’t a definitive answer yet on the inflatables as the company is still working on the bid.  Commissioner Jordan ended up making a motion to provide $10,000 and welcoming the committee to come back to request additional funds if they found themselves in need down the road.  All others present agreed and the motion carried.
Share This Page
Facebook Twitter LinkedIn Pinterest E-Mail