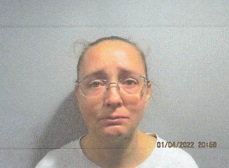 A 41 year old Carmi woman was behind bars following her arrest for a short time Wednesday morning.  Amanda Goff of rural Carmi turned herself in at the Carmi Police Department around 11am mid week and was subsequently booked into the White County Jail.  Goff was wanted on a warrant for Forgery/Unlawful Acquisition of a Controlled Substance/Unlawful Possession of a Controlled Substance (tramadol).  Her bond of $2,500 was met and she was released about a half hour after her arrest.