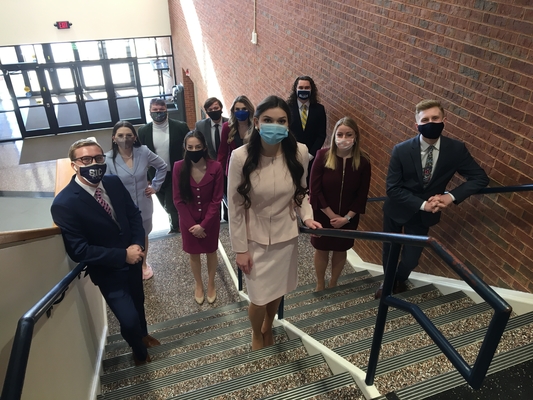 The tournament began Friday with debate competition. After a full day of preliminary rounds, sophomores Collin Sexton (Norris City) and Nick Triplett (Galatia) advanced to elimination rounds. By the end of the day, Sexton had earned a silver medal. Triplett took home a bronze.

Saturday’s competition featured entries in public address, interpretation, and limited preparation events. Every competitor on the SIC team advanced at least one event to elimination rounds, earning what is known as a “team break.” Norris City sophomore Collin Sexton was the Falcons’ top finisher on the weekend, earning two gold medals and two silver on his way to overall individual gold.

He explains, “We knew going into this season that we were going to have to be adaptable, and that is exactly what this team has done. Week after week this team continues to put in hard work, and that hard work is paying off.”

As has been the case throughout the season, the tournament was held entirely online. Team members competed virtually in separate, enclosed rooms. Social distancing and masks were required between rounds. All ballots, announcements, and awards were handled electronically. Still, team members’ mission remains the same.

Sophomore Shainna Ralston explains, “My message is still being heard, just electronically this time! It’s a chance for me to use my voice to advocate for those who can’t, and draw attention to topics that require change.”

The team will compete again Feb. 12-13 before speaking at the state tournament March 5-7. Each competition builds to the national tournament April 4-10. The team is coached by Jenny Billman, John Corum, and Paul Cummins.