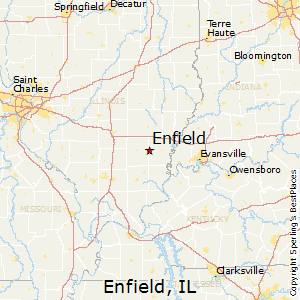 A short but productive Enfield Village Board meeting took place last night.  Scott Mareing was there and has this report…

The Food Shoppe suffered smoke damage after a fire last month, and Ricky and Amanda Mangrum, who lived above the store, moved a mobile home onto the property to live there temporarily until they could find another place.  They were told that they could do so as long as it was only for a short time, but they have been there ever since the fire.  So the two were ticketed, along with the owner of the adjacent property the mobile home is on, and have a court date scheduled for January 13th.

The village was going to close the alley behind Billy Bob and Nina’s, but owner of the alley, Robert Kaiser, passed away several years ago and his widow, Ruby, who lives in Norris City, paid taxes on it this past June.  They have been unable as of yet to contact her, so until they do the matter will be put on hold.

The two village signs on both sides of town, which have been there for quite a while, will be refurbished by the Print Shop in Carmi at a cost of $10 per square foot, or $320 a sign.  As the signs are attached to their posts by a liquid adhesive, they will have to remove the signs and posts to work on them.

A grant application has been accepted from Wabash Valley Development Inc. to allow the village to purchase a new squad car for the Police Department and it will pay 80% of the cost.  A new squad car is much needed as the current one is about 21 years old.  All that is now required to get the grant is a letter from the Illinois Secretary of State’s Office stating that Enfield is in good standing with the state, which they are currently working on getting.

A new printer has been purchased for billing purposes and will be installed Wednesday.

The board approved language for excavating permits to avoid any confusion and to make sure companies abide by the rules.  If they don’t comply, then the village can keep the $1,000 permit fee.

No one signed up for the Shop with a Cop program.

Finally, a 15 minute Executive Session was held and it was decided to give all five employees $1,350, before taxes, in Premium Plans out of the American Rescue Plan funds Enfield received for COVID relief.