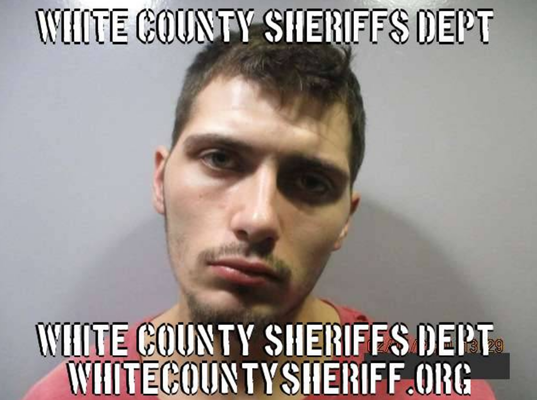 A 23 year old Crossville man, Timothy A. Wilson is being held in the White County Jail following his arrest early Saturday morning by the White County Sheriff’s Department. Deputy Spencer was called to 405 W. Rudolph Street, Apartment 12B in Crossville in reference to a report of a domestic battery having taken place inside the residence. Carmi Police Sergeant Dustin Buttry and members of the Illinois State Police also responded to assist.

Upon arrival, Deputy Spencer met with Samantha V. Newton. Newton advised she had been attacked by Timothy A. Wilson inside the residence. She stated she and Wilson had been involved in a sexual relationship since February 5th and Wilson had been staying with her in her apartment for a number of days during this time period. Newton stated Wilson’s behavior has turned erratic and aggressive towards her in the past days. She told Officers she and Wilson were inside the residence where she was suffering from a toothache. Wilson advised her she should crush an ibuprofen and let it soak into her gums to help with the pain. Newton stated she was crying from the pain, and Wilson began telling her she was acting like a baby. Wilson then told her he was leaving because of her behavior. She said Wilson has threatened to leave the residence a number of times over the past few days and she told Wilson to leave. Newton stated she had loaned Wilson $40 and she told Wilson she wanted her money back. Wilson then threw money at her. When she told Wilson it was not the entire $40 he became irate and attacked her, shoving her against the wall in her bathroom and placing his hands around her neck choking her and yelling obscenities. Once Wilson let go, they both went downstairs and Wilson shoved her into another wall in the living room. Newton stated Wilson then began throwing her around the living room causing her shirt to rip apart in the back. She then told Wilson she was going to call the police to report the incident. Wilson left the apartment with Newton’s cell phone so that she could not call police. Newton then went outside her home and asked another resident of the apartment complex to call 911. After Newton went back into her residence, Lacy D. Duncan entered Newton’s apartment without permission. She stated Duncan is friends with Wilson and lives next door to her. Newton told Officers Duncan was screaming at her and threatening her and she was forced to push Duncan out of her apartment. Later, Wilson and Duncan both came back to the apartment. Duncan stayed outside, but Wilson reentered the residence and removed some of his items from the home. Duncan also gave Newton back her cell phone which Duncan stated Wilson had with him when he went to Duncan’s apartment.

Deputy Spencer observed red marks on Newton’s face and neck and observed the back of Newton’s shirt was ripped open. Newton stated she did want to file charges against Wilson for domestic battery. Officers then went to Duncan’s residence to locate Wilson. Deputy Spencer spoke with Duncan and she advised Wilson had come to her residence and asked her to keep his possessions for him. Duncan stated she thought Wilson had exited through the front door of the residence, but after further speaking with Officers, she said she was not certain Wilson left the residence. She agreed to enter her home and determine if Wilson was inside and ask him to come outside. A short time later, Wilson exited the apartment and was arrested for domestic battery. Wilson stated he did not understand because he had not touched anyone. He told Officers he and Newton had been arguing but he did not touch Newton. Deputy Spencer placed Wilson in handcuffs and he was transported to the White County Jail by an Illinois State Police Officer.

Newton also stated she wanted to sign a complaint against Duncan for coming into her home without permission. She said there are surveillance cameras in the apartment complex that should verify this. Deputy Spencer allowed her to sign a probable cause complaint against Duncan for criminal trespass. Deputy Spencer advised Duncan to stay away from Newton and advised Newton that she could seek a Stalking-No Contact Order against Duncan and an Order of Protection against Wilson.

Newton stated her children were inside the residence the whole time of the altercation between Wilson and herself. Deputy Spencer advised Newton that the Illinois Department of Children and Family Services would have to be notified due to the children’s presence at the time of the incident.