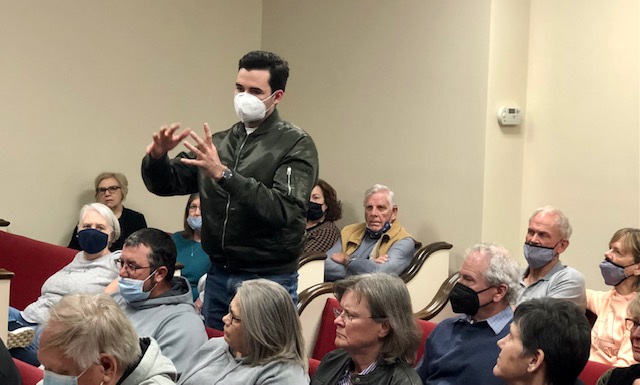 A White County man made it clear Tuesday night he was disappointed in the new Ranger Power Solar Farm coming to the county.  Waylon Chapman addressed the County Board raising concerns about the future decommissioning of the industrial solar farm, damage to roads to and from the site,  prevailing wage for workers there, and roughly 3 pages worth of grievances.  He also implored the county to actively seek a hospital and prepare for a natural disaster.

Sam O’Keefe (pictured) of Ranger Power was also on hand at the meeting.  He was there to ask the board to consider an updated Lanscaping plan, Decommissioning Plan, and the application to amend the Solar Farm Operating Permit to include additional acreage.  County board members said they only received the updated plan on Friday and hadn’t had time to review it.  They instead voted to table it and verbally planned a special meeting in the next week to take it under consideration.

The county board also accepted and awarded low bidders for the county and township motor fuel tax proposals and also passed resolutions for parcel transactions; two to Josh Hosick for $1,199.29 and $736.85 respectively and two to Brenda White for $1,203.30 and $1,305.62.

The Executive Session board member Ken Usery considered at the February meeting was held this month.  Board members spent about 10 minutes discussing personnel with no action following.  The next regularly scheduled board meeting for White County will be held on April 13th at 7pm from the White County courthouse.