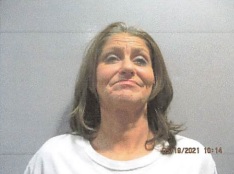 Police say they spotted a Carmi woman driving a truck early Thursday morning when she shouldn’t be.  Just before 1am Thursday, Carmi Police pulled over 49 year old Algeana Collard of Smith Street.  She was allegedly driving a truck on Smith and the officer says he knew she had a Suspended Driver’s License.  In addition to being arrested on that charge, Collard also faces an Operation of an Uninsured Motor Vehicle citation as well.  She was released on her own recognizance at a quarter before 3am and will be due in court on June 22nd.  Additionally, Collard will have a third attempt at a first appearance coming up in August for a Dog at Large Ordinance violation.