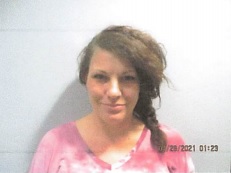 Two area women are facing charges after Carmi Police made arrests shortly after 4pm Wednesday.  The report doesn’t indicate what prompted the stop or interaction, but Carmi Police found rural Carmi resident Robin Kingery behind the wheel of a vehicle at Pundrakes.  She was arrested for Driving while License Suspended and given an additional citation for possession of cannabis in a motor vehicle.  Moreover, 33 year old Kingery faces Felony charges of Possession of Meth and Unlawful Use of Property.  Carmi Police say the alleged owner of the vehicle, 33 year old Audrey Capps of Omaha then arrived on scene.  She was arrested as well and is being charged with Possession of Meth and Unlawful Use of Property.  Kingery is due in court at 3pm Thursday afternoon.  The charges against Capps appear to be the first she’s ever faced.

In November, Kingery was given 2 years of supervision, sentenced to 50 hours of community service and ordered into drug treatment.  She had originally been charged with a Class 4 Felony of Possession of a Controlled Substance.  That charge was dismissed in exchange for a guilty plea to a lesser Class A Misdemeanor charge.