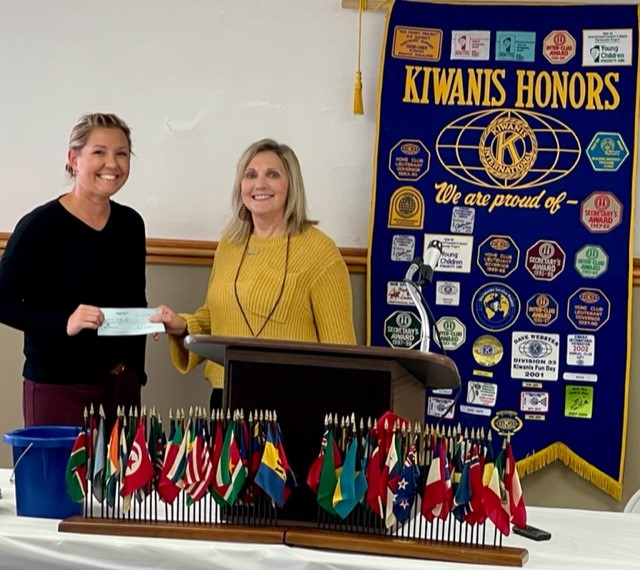 Founded in 2019 by Cynthia and Bryan Atteberry, Lance Yearby, Amber Knight, Kristin Prince, Mike Eyman, and Mallory Stendeback, the Carmi Christmas Elves has grown to more than 20 members and Atteberry says it takes every one of them and more to put together the 200+ displays that make up the Carmi Christmas Lights of Hope each year.  Atteberry visited the Carmi Kiwanis Club Thursday to preview the organization’s annual effort.

Last year, Atteberry says more than 1,000 vehicles packed with light seekers traveled through the expanded display thanks to a quarter mile addition of roadway.  Also new for this coming year, the non profit has secured a 50 foot tall slide to go along with the display and the synthetic ice skating rink.  Instead of paying by donation for the slide and skating rink, Atteberry says the group has secured sponsorships to make those attractions free to the public this winter.  Driving through the Lights of Hope display is by suggested donation of $5 though no one is turned down if they’re unable to support.

The money the group does raise helps benefit it’s Kicks for Kids program.  Friday, October 28th beginning at about 8:15am, more than 450 school age kids will descend on the Carmi Lions Den at 305 First Street in Carmi and they’ll all get a brand new, name brand pair of shoes thanks to the Carmi Christmas Elves and their partnership with Shoe Sensation.  Atteberry says they’ve now outfitted more than 10,000 kids in new shoes despite the costs continuing to go up.  It used to cost about $25 per kid for shoes through the program.  That price is now up to about $40.  While it began in Carmi, the program now outfits kids in several counties and several more states.

Atteberry says it’s incredibly rewarding to be able to help, especially kids, even more so kids in our own community.  The Christmas Lights of Hope will be open this year from the Friday after Thanksgiving (11/25) through January 1st.  In addition to the light display, the giant slide, and skating, Atteberry says folks can also expect live reindeer this year and even visits from Santa.

The Carmi Kiwanis Club presented Atteberry with a $150 check to sponsor an evening of free slides and skating.