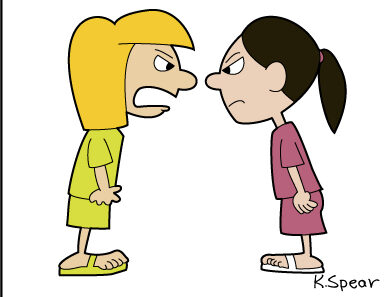 Cartoon of two angry girls. One says, "I am NOT upset. I'm just more animated than usual."

According to the White County Sheriff’s Department, at about 2 PM Saturday Deputy Michael Brown responded to a dispute at the apartment building at 509 4th Street in Crossville between 38 year old Shaina M. Ward and Chastity D. Jenny, 32.

Jenny said Ward’s brother was arrested the night before and was retaliating against Jenny for the brother getting arrested. Jenny also said Ward had been threatening to fight her. Ward said her brother, Devin Ward, had been arrested on what she claims were “bogus” charges.  And she and Jenny exchanged messages about fighting one another.

The owner of the apartment building phoned and told the Deputy that Ward did not live there and was trespassing, although Ward says she lived in one building but the address was in the other building with her grandmother.

The Deputy asked Jenny if she wanted to sign a complaint for Disorderly Conduct (Breach of the Peace) and she agreed.  She also wrote a statement form for her boyfriend, 46 year old Earl Scott Roark, which he signed.

As the Deputy was leaving he was met by Ward, who asked what would happen if either person got an order of protection against one another, which he explained, and what the bond would be if a warrant was issued.  He explained bond could be set at whatever the state deems fit.

A report on the incident was forwarded to the White County State’s Attorney.