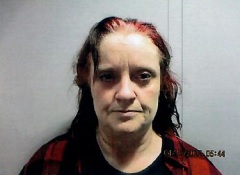 A 48 year old Crossville woman is facing another day in court following her arrest Wednesday night.  Crystal Morrill of Fourth Street was spotted by a White County Sheriff’s Deputy leaving Maier’s Grocery with no headlights on while the vehicle was in motion prompting a traffic stop.  The report alleges in the process of being pulled over, Morrill swerved into the oncoming lane and past it, jumping the curb and traveling a good 575 feet before coming to a stop.  When confronted, Morrill told the law enforcement officer that she had marijuana while a passenger stated “marijuana is legal so what is the problem”.  A consented search commenced in which the deputy indicates he found two “joints” as well as a methamphetamine pipe in the rear floorboard.  At that point, Morrill was arrested and is being charged with a misdemeanor count of Possession of Drug Paraphernalia along with felony counts of Possession of a Controlled Substance as well as Possession of Methamphetamine.  The deputy then logged the items and found that there was a total of nearly 16 grams of meth in the vehicle.  Morrill had a first appearance Thursday morning and faces a preliminary hearing on May 11th.