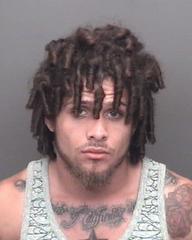 Earlier this morning, Kylan Stevens, 21, of Evansville, turned himself in at the Posey County Jail.  A felony warrant for his arrest was issued in December after Indiana State Police investigated a burglary at a Poseyville residence. Stevens was arrested for Burglary and Theft. He’s currently being held on bond in the Posey County Jail.

Posey County – Indiana State Police launched a criminal investigation after a Poseyville homeowner noticed someone had burglarized a barn located on his property at 9111 Cleveland Road. The alleged burglary and theft occurred sometime in the early morning hours of December 6. The homeowner reported a Suzuki four-wheeler, a Yamaha 70cc dirt bike, a 12’ cargo trailer and numerous other items had been stolen from his barn.

On December 7th  the Posey County Sheriff’s Department contacted Indiana State Police and informed investigating troopers that Evansville Police had located items matching several stolen items from the Posey County burglary at a residence located at 1227 West Maryland in Evansville.  When troopers arrived and conducted their investigation they found four brand new sump pumps, one Ryobi backpack leaf blower, an Echo chainsaw, three antique ceramic vessels, a pair of western boots, a vacuum cleaner and a 2012 Sure-Trac cargo trailer. All items located were allegedly stolen from the barn in Poseyville. The Poseyville homeowner soon arrived and identified his property. The property was then released to the homeowner. The red Suzuki 50cc four-wheeler and white/pink Yamaha 70cc dirt bike was not recovered and still missing.

Further investigation revealed Steven Collins, 43, allegedly drove to the Poseyville property with Christopher Vallee, 42, and Kylan Stevens, 21, all from Evansville. They allegedly backed the truck into the barn and hooked onto the trailer.  After allegedly taking numerous items that belonged to the homeowner, they drove away with the trailer.