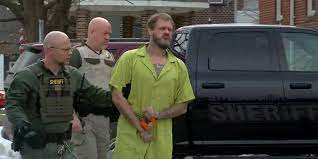 Ray Tate, the 41-year-old man convicted of murdering a Wayne County Sheriff’s deputy last year, made a Zoom appearance in Clinton County Court on Friday July, 8th on 30 felony charges stemming from events following the crime spree that started after Deputy Riley was shot on Interstate 64. While Tate is already serving a life sentence in Menard Correctional Center for Deputy Riley’s first-degree murder, Judge Christopher Matousch on Friday set bond in the Clinton County case at half-a-million dollars.  Tate is currently attempting to withdraw his guilty plea in the Wayne County case and to have his life-sentence tossed out. Prosecutors claim that after shooting Deputy Riley and stealing his squad car, Tate then forced a truck-driver to take him to Missouri where he allegedly shot another person and took their vehicle.  Missouri prosecutors have filed 14 felony charges against Tate and have expressed a strong desire to bring him to trial. Tate then came back across the border into Illinois where he reportedly carjacked another person taking the driver and his car to Clinton County where he allegedly forced his way into a rural Carlyle home, holding both the car driver and the homeowner captive during a police standoff.  The two men were ultimately released unharmed. Clinton County authorities have charged Tate with 13 Class X felonies for aggravated kidnapping and also home invasion, four Class 1 felonies for residential burglary and possessing stolen firearms, Class 2 felonies for being a felon in possession of a firearm with a prior conviction, Class 3 felonies for aggravated battery, and aggravated unlawful restraint, and three Class 4 felonies for reckless discharge of a firearm. Tate is prohibited from have any contact with his alleged kidnapping victims Leonard Cox or Joseph Reagan.  A preliminary hearing in the case is scheduled for August 24.