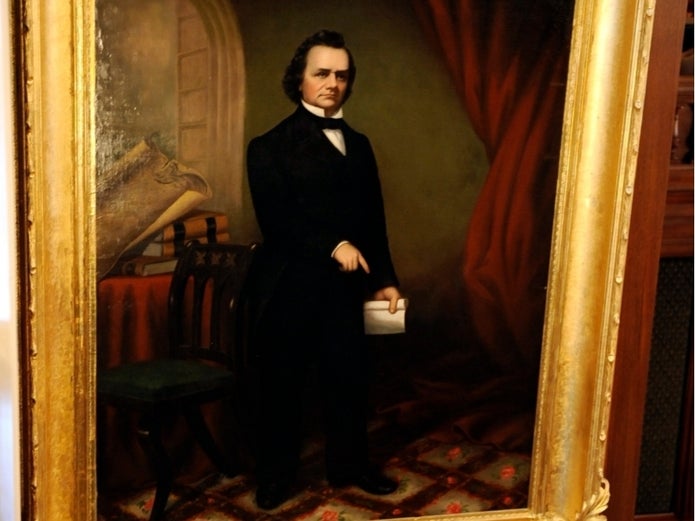 Democratic Illinois House Speaker Michael Madigan wants to remove a statue and portrait of a prominent Democrat in Illinois’ history who owned slaves. Madigan said he wants to pass a resolution to replace the portrait of 19th Century Illinois politician Stephen Douglas with a portrait of former President Barack Obama. Madigan also wants to remove Douglas’ statue from the capitol grounds.

“While reading Sidney Blumenthal’s book ‘All the Powers of Earth’ concerning the pre-Civil War period a few months ago, I learned of Stephen Douglas’ disturbing past as a Mississippi slave owner and his abhorrent words toward people of color. I advised my staff to research and confirm the history to support removing the Douglas portrait from the House chamber. I became more resolute in my decision to remove the Douglas portrait as we witnessed the tragic killing of George Floyd and the bravery of so many who have stood up and spoken out against injustice that has never been fully addressed.

“So today, I am taking the first important step of removing this unnecessary reminder of our country’s painful past. When the Illinois House returns in the fall, I will offer a resolution to be voted on by the House to authorize removal of the Douglas portrait and be replaced with a portrait of President Barack Obama, a more fitting representation of the modern-day Democratic Party. In the meantime, I am looking into ways the portrait can be covered immediately.

“Memorializing people and a time that allowed slavery and fostered bigotry and oppression has no place in the Illinois House, where the work of all Illinoisans is conducted. We can only move forward in creating a more just world when these symbols of hate are removed from our everyday lives.

“I am calling for the removal of the Douglas and Pierre Menard statues from the Capitol grounds, as well as moving the statue of Martin Luther King, Jr. to a location of more prominence and honor. I ask that the Office of the Architect move expeditiously on this matter to take a vote in the coming days to remove these statues. Further, I am asking the Office and its board to work with all Illinoisans to conduct a thorough review of all statues, portraits and symbols on the Capitol grounds to ensure any inappropriate fixtures are removed and all feel welcome.

“Of course, removing these images does not erase our history, but it is one more step in acknowledging the suffering of so many and committing to creating a better Illinois for everyone.”