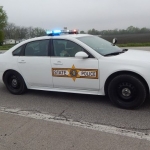 Illinois State Police are investigating a Saline County man’s homicide.  The Saline County Sheriff’s Office requested assistance last Tuesday, May 12th after locating a deceased black man along Route 13 just west of Harrisburg.  The man was later ID’d as 42 year old Doyle Winston III of Harrisburg.  An autopsy was performed on Friday, May 14th and it was determined at that time his cause of death was homicide.  State Police didn’t give a specific cause of death, but say the investigation is open and ongoing.