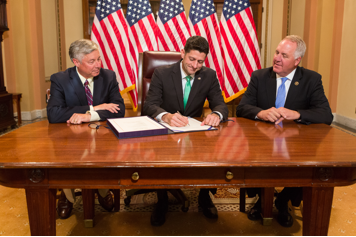 After clearing its last legislative hurdle in the Senate last week, the Frank Lautenberg Chemical Safety for the 21st Century Act was signed by Speaker Ryan on Monday. Joining the Speaker in sending off the bill to be signed into law were Energy and Commerce Committee Chairman Fred Upton (R-MI)and Environment and the Economy Subcommittee Chairman John Shimkus (R-IL), who guided the multi-year effort to update the 40-year-old Toxic Substances Control Act of 1976 through the Energy and Commerce Committee last year.

“This bill represents the most meaningful update to issues involving environment and the economy we’ve had in decades,” said Upton and Shimkus. “We’re looking forward to the president signing this important bill into law.”