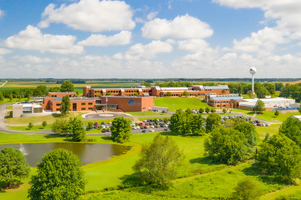 –Upwards of $5 million Earmarked for Construction and Endowments-

Just recently, upon the passing of Col. Hise, President Jonah Rice and the board learned that nearly the entirety of his estate, valued at upwards of $5 million plus, would be coming to the college.  There are key restrictions on the use of funds.

“Col. Hise was a remarkable man—a true visionary who believed in the mission of SIC,” said Dr. Jonah Rice, president of SIC.

Hise grew up in Omaha and Harrisburg with his twin brother. Both served careers in the military, earning their law degrees, and also forming many business partnerships along the way. Neither married.

Dr. Pat York, chairman of the SIC Board of Trustees was both saddened by the passing yet elated at the news of the Colonel’s gifts.

“He will be missed by all of us as he was a good friend who was dedicated to the betterment of this area,” said York.

Funds have various purposes outlined by the donor as the estate may take up to two years to finally settle, so the college will not see proceeds for at least 24 months or perhaps a bit longer.

“This gift couldn’t have come at a more perfect time for the college,” said SIC Trustee David Dennison.

“With state funding shrinking and our population in southern Illinois declining, these private funds from the Colonel will leave a legacy that will help SIC and students for decades in the future,” added Trustee Blake Bradley.

The Hise estate gift—when combined with the Colonel’s previous gift—should total upwards of $8 million to SIC, one of the largest gifts to a community college in the state of Illinois.

“This type of gift is huge, a once-in-a-lifetime gift for a rural college,” said SIC Trustee Richard Morgan. “We are so thankful for the Colonel’s contribution.”

Rice said he would miss the friendship of the Colonel.

“He was briefed on what was going on at the college at all times. We shared a lot of dialog, and he really impressed upon me that hard work and exceptional results are to be expected—qualities that made him so successful,” said Rice.

SIC Foundation Chair Brian Surprenant said the Colonel was extremely supportive of the college and the steady leadership that ultimately led to great trust and mutual respect.

“The Foundation will be a wise steward of the Colonel’s gift.  He deserves that commitment,” said Surprenant.