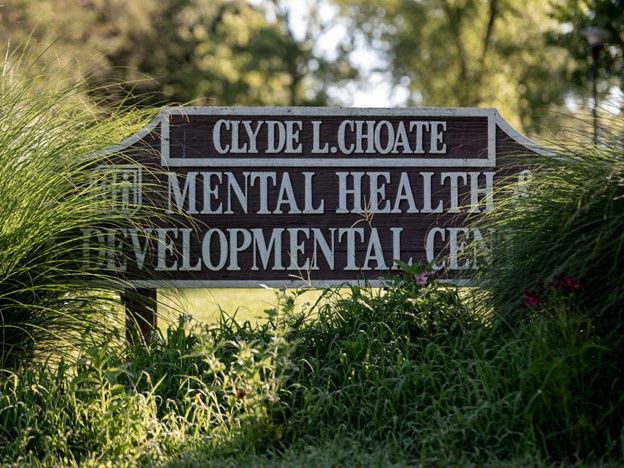 This article was produced for ProPublica’s Local Reporting Network in partnership with Lee Enterprises, along with Capitol News Illinois.

Several employees at Choate Mental Health and Developmental Center attempted to cover up a brutal assault on a patient, according to a new report by the watchdog office within the Illinois Department of Human Services.

The report by the IDHS Office of the Inspector General said that the “widespread attempted cover-up” around that incident pointed to a deeply entrenched “code of silence” among some workers. The OIG report comes after a series of stories by Capitol News Illinois, Lee Enterprises Midwest and ProPublica revealing a culture of patient abuse and cover-ups at the state-run facility in rural southern Illinois that serves people with developmental disabilities, mental illnesses or a combination of disorders. The news organizations’ reports detailed the beating of Blaine Reichard in December 2014 and attempts by staff to conceal the abuse; the series also showed how workers accused of abuse allegations seldom face serious consequences for their actions.

The OIG report, which comes nearly eight years after the attack on Reichard, echoed many of the news organizations’ findings and called on IDHS to do more to protect patients’ safety. The news organizations had sought the report when it was finalized in September under the Illinois Freedom of Information Act, but the request was denied until this month.

Among the most egregious violations, the OIG’s investigation found that mental health technician Mark Allen held Reichard in a chokehold and punched him repeatedly in the face after the two argued, leaving the patient with two black eyes, a busted lip and bruising to his face and upper body. The OIG additionally cited five mental health technicians for neglect after they witnessed the abuse but didn’t seek medical care for the patient or report the abuse to authorities, despite the fact that one of them later told authorities that it looked like Reichard had “gone three rounds with Mike Tyson.”

But the OIG investigation showed that the problem was not confined to a few bad actors. Among the challenges investigators faced when they were called to the scene: One of the mental health technicians initially lied to state police and said he’d been in the bathroom at the time of the abuse. A housekeeper told them she hadn’t seen any blood in Reichard’s room but later acknowledged that she had. A social worker who was romantically involved with Allen leaked information to him about the investigation. And a nurse and doctor gave misleading statements about the extent of Reichard’s injuries, the OIG report said.

That collusion led the inspector general to find Choate itself negligent. The facility, the OIG said, must be held responsible for “failing to prevent the establishment of a culture in which so many employees chose to protect their fellow employees instead of protecting an abused individual and apparently felt comfortable doing so.”

The OIG report concluded: “That so many employees participated in the cover-up of the abuse of [the patient] suggests that this type of conduct may be endemic at Choate.” Previous reporting by the news organizations revealed credible abuse allegations in which the state’s attorney declined to bring charges because he said that employees would not cooperate in determining what happened.

The OIG report said that it is “crucial” that when staff lie or withhold information in an investigation, they “experience consequences for their actions” — and that one of the best ways to identify such conspiracies is by using video footage. The watchdog recommended the installation of interior security cameras at Choate in order to break the code of silence “from the onset.”

In the Reichard case, more than a year passed before anyone was arrested in connection with the beating. In 2016, Allen was charged with felony battery and intimidation, and three others — Curt Ellis, Eric Bittle and Justin Butler — were charged with felony obstruction of justice. All ultimately accepted plea deals for reduced charges: Allen was convicted of felony obstruction of justice for lying to the police, and the others were convicted of failing to report the abuse, a misdemeanor.

But no one was held criminally responsible for abusing Reichard and no one served prison time.

Reporting by the news organizations also showed that Allen continued to be paid for a full year after the attack, up until he was criminally charged. He has been suspended without pay since then and resigned in early October, a department spokesperson said.

But the other three had never missed a state paycheck until they were suspended pending termination last week in the wake of the OIG report finding them negligent. The state has paid them, collectively, in excess of $1 million since Reichard’s attack. Initially, they were assigned to duties away from patients, such as lawn care, cooking and laundry; later, they were sent home on administrative leave.

In addition to the OIG findings against those who faced criminal charges, the report cited two other employees for neglect — Christopher Lingle and John “Mike” Dickerson; the report concluded that both witnessed the abuse and didn’t intervene or report it. Lingle continued to work until earlier this year and is now suspended without pay pending termination. Dickerson worked at the facility until he retired in 2017. In his last three years on the job, he mowed the lawns at Choate.

In a statement, IDHS spokesperson Marisa Kollias said that all of the employees named in the report had either resigned or were suspended pending discharge following the conclusion of the OIG investigation in September. She previously said that IDHS could not take disciplinary action against the employees until the conclusion of OIG’s case. That investigation was held up for eight years awaiting the resolution of Allen’s court case, which concluded last December.

Kollias also said that in the eight years since the case began, “additional safeguards have been put in place to protect residents, patients and staff from harm.” Those changes include bringing in Equip for Equality, a legal advocacy organization, to monitor conditions inside the unit, setting up training on the reporting of abuse and neglect, beefing up the security and professional staff at Choate and installing security cameras — something the OIG has called for more than 20 times over the past five years. (This week, the IDHS spokesperson said the department has 39 cameras and plans to begin installing them this month.)

Despite OIG’s call for more serious consequences for employees who impede abuse investigations, the report stopped short of issuing more serious findings against the mental health technicians that would have prohibited those staffers from seeking employment in a different health care setting such as a hospital, nursing home or veterans home.

State law requires that the OIG report the names of any employees it cites for abuse or “egregious neglect” to the Illinois Department of Public Health’s Health Care Worker Registry. Under that law, Allen will be reported to the registry but the others will not.

Stacey Aschemann, a vice president with Equip for Equality, said the fact that these workers are not prohibited from future employment with vulnerable populations is “very troubling.” Peter Neumer, IDHS’ inspector general, said it is his office’s general policy not to comment on specific details of its investigations or its decision-making process.

Aschemann, an attorney, said it is evident from the report that the OIG felt constrained by the current regulatory language. The report stated that the behavior of the workers who witnessed the abuse was “profoundly troubling” but did not fit the legal definition of “egregious” because Allen, not the other technicians, was directly responsible for the injuries, and because the other technicians’ failure to report the abuse did not result in the patient’s death or a serious deterioration in his physical condition.

Though he declined to comment directly on the case, Neumer signaled that legislative action may be needed. “OIG,” he said, “is prepared to collaborate on and advocate for policy changes to further deter employees from engaging in ‘code of silence’-type behavior.”

Aschemann was more direct, saying that Illinois lawmakers should address shortcomings in the laws governing conduct standards for direct-care workers.

”It is clear that laws need to be updated to both impose harsher penalties for this misconduct and to ensure that employees who turn a blind eye to the well-being of the people they are paid to help are reported to the Illinois Health Care Worker Registry as ineligible to work in health care settings,” she said.