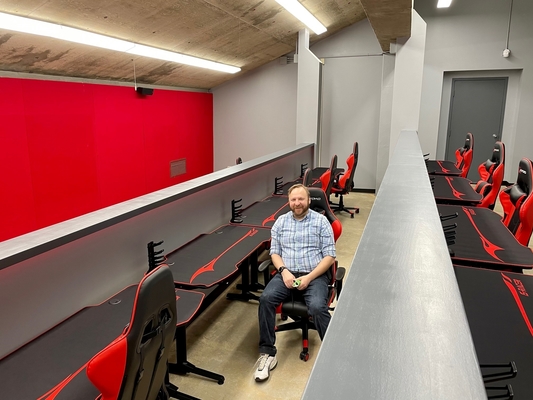 The new team will be a member of the National Association of Collegiate Esports (NACE), and will participate in tournaments hosted by NACE. Games played among NACE competitors during the 2020-2021 academic year include Valorant, Overwatch, Rocket League, Super Smash Brothers, Madden, FIFA, Hearthstone, Counter Strike: Global Offensive (CS:GO), and Fortnite. Games may change year-to-year.

The SIC Falcons Faction of Gamers will have a gaming arena, as well. SIC has converted a centralized space on campus that is now equipped with Alienware gaming computers with “some pretty impressive specs,” according to head coach Jason Fitzgerald, SIC’s Math, Science and Technology Division Chair. Adjacent to the gaming arena is a team room where team members can study, have meetings with the coaches, or just take a break and relax between classes and practice.

“I am especially excited about the esports program because it gives us a chance to tap into a segment of the population that is often overlooked and provide them with a way to use something they love to do to help pay their college tuition, while forming new friendships,” said Fitzgerald. “As a longtime recreational gamer, I have seen firsthand the friendships that can develop as a result of gaming and am excited to be able to offer that opportunity to students at SIC.”

Fitzgerald said that as a member of the SIC Falcons Faction of Gamers, team members will have the opportunity to become better gamers, better students, and overall become productive members of the community. In addition to honing their skills at gaming, team members will be taught how to be good students (finding the balance between academics and gaming while keeping their personal health on a positive level) and how to be respectful, responsible members of not only the gaming community, but also the SIC community and the community beyond the college walls.

Fitzgerald said any student that is interested in gaming is encouraged to apply. All majors are welcome, as long as the student is enrolled as a full-time student at SIC. For the first year, games will be played on computers, but they are hoping to include some console play later.

In future, coaches hope to host tournaments for local high school (and possibly junior high) students to encourage competitive gaming. Additionally, they hope to eventually offer summer esports camps to introduce local middle school students to esports, and esports scholarship students would be involved in the planning and events.

“I, and my coaching staff, look forward to establishing an award-winning team that can join the ranks of the many other great competitive teams at SIC,” said Fitzgerald.

For more information about the SIC Falcons Faction of Gamers or to be recruited, visit www.sic.edu/esports or email [email protected].