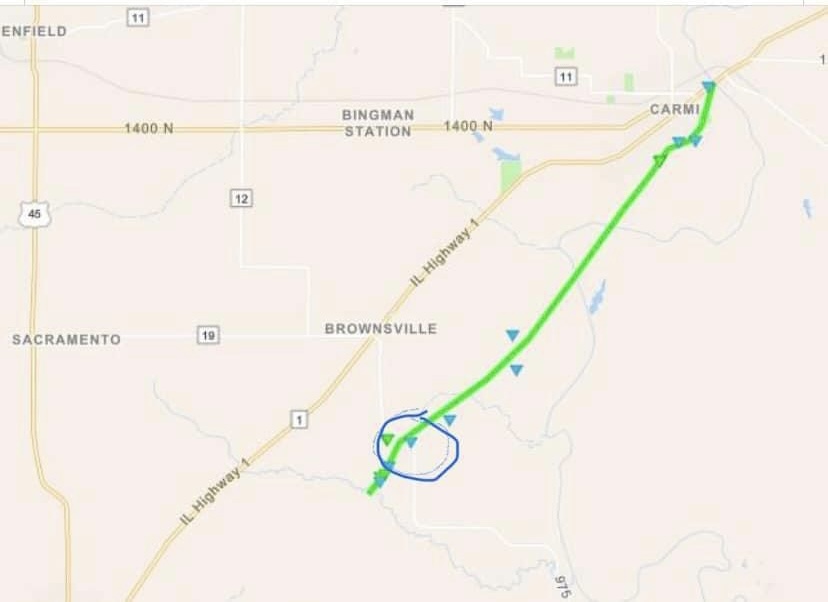 National Weather Service damage survey crews wrapped up their investigation Wednesday afternoon in Carmi coming to the conclusion an EF-1 Tornado was on the ground for nearly 8 miles.  Experts say estimated peak winds were up to 100 miles per hour during the 7 minutes the tornado was on the ground (6:11pm – 6:18pm).  At max width, meteorologists say the twister measured 400 yards and traveled neatly parallel to Route 1 from south of Brownsville to east of Carmi.  In addition to the high winds, most of the region also saw 1” – 2” inches of rain though some higher pockets did report higher totals.  At least a dozen homes in Carmi had shingle damage.  A few sheds were extensively damaged or completely obliterated.  Dozens of trees were uprooted or snapped.  A small boat was blown into a nearby pond and power poles and lines were down along the path.  There was also a significant gas leak reported in the Paint Creek Lane area and dozens of trampolines were launched from their yards.  At least one was impaled on a clothesline pole.  You can find hundreds of damage photos from the storm on the WROY WRUL News facebook page, some taken by us during and in the immediate aftermath of the storm, with many listener submitted pictures as well.