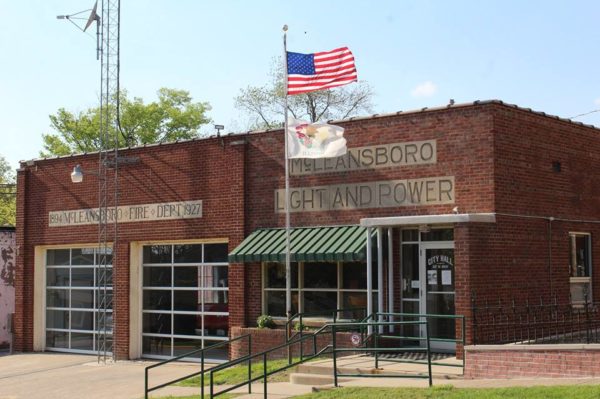 The Mcleansboro City Council held their regular monthly meeting last night by conference call due to the coronavirus.

During a 30 minute executive session, the council accepted the resignation of Leroy Browning as fire chief and the announced the hiring of Jim Morris as the interim Fire Chief to be put on the agenda for next month’s meeting.

Approved was the moving forward of the Market Street Bridge project, even though it’s actually more like a culvert than a bridge.  Andy Curry of Curry and Associates Engineering will provide services to design a plan that would replace the bridge for a cost not to exceed $44,000.

In order to apply to be reimbursed by the Illinois Department of Health, they approved $10,757.10 for the purchase of equipment and $13,522.26  for the chemicals to begin their mosquito abatement program.

The council approved a Class F Beer Garden license for the American Legion 4-2.  Since they already have a Class C liquor license, they can have a beer garden as long as they comply with the fencing wall and construction terms surrounding its perimeter.  Aldermen Biggerstaff and Glenn voted against the measure.

The evaluation and price setting of liquor licenses was tabled until next month’s meeting.

Concerning the Log Cabin at Lake Mcleansboro, they decided to resume the work on the heating and air and the donation of the labor and get more information concerning the electric and plumbing.  Work on the cabin had been delayed due to COVID-19.

The construction of a three sided lean-to shed near the light plant for the storage of city equipment was tabled, as they need to consider a new site due to some power lines too close to the building to put a shed there.

They accepted the highest of two bids for hay bailing at the airport from Caleb Burris for $1,996.

They approved the highest bid from Oilfield Electric for the old digger truck for $5,000.

Council approved $12,000 a year to renew the technology support agreement for the city with Wilson’s Computers.

And they also authorized a TIF reimbursement of $1,202.48 for a property owned by Jerrod K. and Louis L. Vaupel.

There will be a power outage at Meta Hills on Tuesday, June 16th  to fix a utility pole.  Power will be out for about four hours that morning and affect about 30 homes.  Those affected will be give hand-delivered letters this Friday notifying them about the outage.

An agreement on animal control between the city and county has been worked out and will be presented to the county board next week.

The health department has the authority on public pools and will probably not authorize any opening of public swimming pools this summer.  They are concerned that if there was another coronavirus outbreak it might prevent schools from starting on time, so out of caution the city pool will most likely not open.