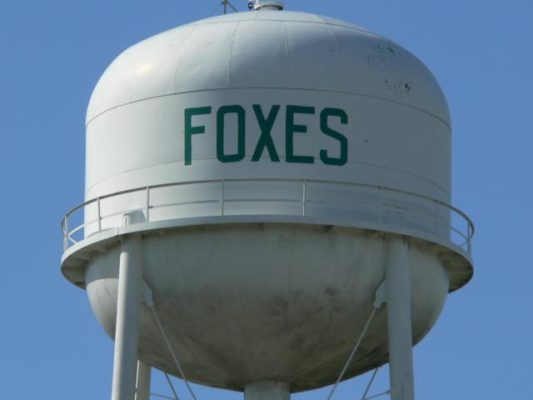 Aldermen said they have received many compliments from the community on the new playground equipment at the reservoir.

After a very lengthy review and discussion of proposals from Auctioneers Jimmy Johnson and Don Burke, Council decided to go with Johnson’s proposal, for the sale of city owned properties, at a cost of $800 – $1200 for advertising. It was decided to hold off on the sale of the lots until a tentative date of Saturday, May 1, 2021 to allow people to get their income tax refunds.

Rod Martin updated Council on the water tower project and the November pay request for the project. He said work on the water tower is moving along rapidly, with the tank painting completed, and the overall project about 77% complete. There is still some electrical work and a few other things that need to be done. Martin is looking into the cost of painting the word “FOXES” vertically down the stem of the tank and will bring that estimate to the next meeting in December. A pay request was approved for Caldwell Tank in the amount of $191,425 and Shawnee Professional Service in the amount of $12,525.46 for a total November payment of $203,950.46.

The sidewalk project is also nearing completion. The final pay request to Sharp’s Stone and Concrete is $3,495.52 was approved and has already been paid.

Rod Martin told Council the proposed sanitary sewer lift grant application is still being put together and a meeting will be held next Thursday to go over the application before submitting it to the state with the hopes that the state will invite the City of McLeansboro to submit an application for additional funds to provide for such things as sewer extension.

A representative from IPMG (Insurance Program Managers Group) explained to Council that the City’s insurance premium, renewable December 1st, would increase about 1%, including a 9% credit. The reason for most of the increase is Workman’s Compensation costs, as well as the addition of the water tower, and an increase in vehicles and equipment. After some discussion it was decided to approve the renewal of IPMG in the amount of $180,125.

Council discussed the creation of a new policy to deal with the current COVID-19 (Coronavirus) pandemic. Packets will be distributed to each Department, outlining the ever changing guidelines from the CDC, the Hamilton County Health Department, and the Governor’s Executive Orders. Because the guidelines are updated so often, a specific policy cannot be created and there are no consequences listed for disobeying the guidelines and will be handled on a case by case basis. The mayor and others will review the packet and decide what changes need to be made. No action was taken on the issue at Tuesday night’s meeting.

Alderman Dale Bigerstaff discussed, for about 12 minutes, the possibility of the City of Mcleansboro’s acquisition of railroad property and the viaduct. The approximately 22 acres in length could be used as a possible bike path, to place a sewer line through the area or possible utilities. The removal of the viaduct would make it easier for trucks and other transportation through the area and would allow for the road to possibly be built up in the area to eliminate the flooding problem the City currently has in the area by the viaduct. It was decided to form a committee of Dale Biggerstaff, Billy Glenn, and Tom Maulding to discuss and bring back to Council how they want to proceed.

Council approved a TIF reimbursement to Jerrod Vaupel in the amount of $1,202.46.

Action was taken on funding for the Gravity Sanitary Sewer Extension along Foote and Oak Streets. A sewer line that runs through private property needs to be removed, according to the IEPA, and made to run along Foote Street to Oak Street and from Oak Street back to Hancock, using only local funds to pay for it. Council approved the use of local funds for the extension, as well as funding for the Sanitary Sewer Extension serving 208, 212, and 214 W. Jefferson Street and 204 N. Park Street.

The next meeting will be December 8th at 6:00 PM