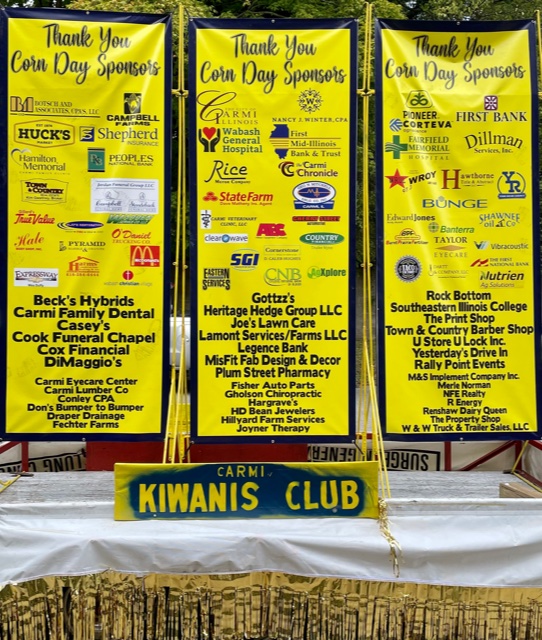 Another Corn Day is here in Carmi and as is custom, the Kiwanis Club took it’s Thursday luncheon prior to the event as an opportunity to say thanks to the nearly 100 sponsors who financially support the festival.  Nancy J Winter, a past president of the club and member of the fundraising committee opened the meeting with totals and had the distinction of recognizing the business community.

The weather looks impeccable for this year’s festival, a welcome sight after being forced to cancel in 2020 due to coronavirus concerns.  That occurrence led to this year’s theme, “Straight Outta Cornantine”.  More than 90 parade entries are expected to travel from in front of the Carmi White County Jr/Sr High School through downtown to Locust Street Saturday afternoon beginning at 4pm.  Other highlights include a Corn Day pageant to be held at 5:30pm on Friday, the

annual Cornhole Tournament at the same time in the First Mid parking lot, and at 7pm, Head East (coming back to Carmi again after originally playing as Bloody Williamson during the heyday of Teen Town allegedly).  On Saturday, the true, official Corn Day, events begin at 8am and don’t wrap up until well after 12 hours later.  The Guardian Center’s Candy Corn Run begins at First Christian Church to kick off the day.  The Pet Parade is at 10am downtown.  At 10:30am, the Appetizers will play from the Car Show stage.  Registration for the Car Show begins early in the morning and will be available for enthusiasts to roam about until 2pm or so.  A Cake Walk is planned for 11am and the Chili Cook Off, once at risk of having to be cancelled due to low turnout, now has almost 10 entrants and will be held at Veteran’s Memorial Park from 11am – noon.  The annual Corn King and Queen coronation honoring top White County 4-H members is at noon from the Main Stage.  Luke Simon performs at 1pm.  He’s followed by Bringing Home at 2pm.  The parade starts at 4 and is followed by Clayton Mann at 7pm.  Mann is opening for the Corn Day headliner, Confederate Railroad.  The country hit makers play at 8pm.

The Carmi Kiwanis Club is also hosting a 50/50 raffle to help raise additional funds the organization will use to help lift the community up.  As of post time, the current 50/50 split is $3,155, the amount of money someone will walk away with if they have the winning ticket drawn Saturday night at 8pm and announced from the Main Stage.  Tickets will continue to be sold through Saturday at 7pm and will be available for purchase at the hospitality tent, located near the White County Senior Citizen’s Center as well as at a ticket booth to be located between First Mid Bank and the Main Street/Oak Street intersection.  It should be easy to find assistance throughout the festival as Kiwanis Club members will be decked out in their trademark blue t-shirts with Kiwanis on the front and Event Staff emblazoned upon the back in bright yellow.

You can stay tuned to WROY/WRUL on air, online, and via social media or at the Carmi Kiwanis Club facebook page.