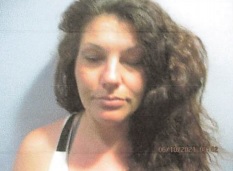 If 33 year old Robin Kingery needed proof she was hanging around the wrong people, a Carmi Police report provides it.  She was left to deal with the police and is now facing a handful of new charges after the driver of a car she was in fled after being pulled over late last week.  Officers observed a vehicle Thursday afternoon at a location where a wanted subject had been staying they say.  The windshield was cracked on that vehicle and a proper license plate wasn’t displayed.  When the vehicle left, the officer pursued and initiated a traffic stop just north of town on Centerville Road.  The driver pulled off on a dead end road, exited the vehicle and fled on foot despite a positive ID.  Officers then searched the vehicle finding meth, cannabis, drug paraphernalia and Kingery.  She was jailed and is looking at more of the same charges she’s been facing lately including Unlawful Use of Property, Possession of Meth, Possession of Drug Paraphernalia, and Possession of Cannabis in a Motor Vehicle.  Kingery is due in court Monday morning.  A warrant will be issued for the driver that ran off.