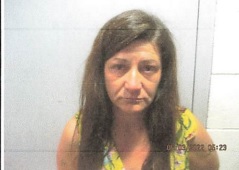 A Carmi woman is free on bond following an alleged incident on 5th Street Tuesday evening.  Carmi Police say they were called to 604 5th in reference to a disturbance at around a quarter after 7.  The reporting party alleges 41 year old Kelly Jones of Sycamore Street arrived at the 5th Street home some 20 minutes prior and was upset.  Jones reportedly left for a short time and then returned yelling and brandishing a pocket knife eventually making threats before leaving.  Law enforcement then found Jones at her Sycamore Street home where she was taken into custody and charged with both Aggravated Assault and Disorderly Conduct.  Jones bonded out around 9:30 Tuesday night.  Online court records don’t yet indicate her court date.