Yesterday afternoon at approximately 3:10, Warrick County 911 dispatchers received several calls from concerned motorists about a white 2011 Chevrolet Cruze traveling recklessly westbound on I-64 from the 50 mile-marker. Motorists informed dispatchers that the vehicle had already driven into the median on three separate occasions.

Sgt. Tom Weber responded to the area and spotted the vehicle at the 33.5 mile-marker, which is west of the Lynnville exit. The vehicle was weaving from the shoulder on the north side of the roadway to the median on the south side and was traveling in excess of 80 mph.  The vehicle finally stopped in the middle of the left lane near the 31 mile-marker. “In my 23-years of service with the Indiana State Police, this was the worse driving I’ve seen,” said Weber. 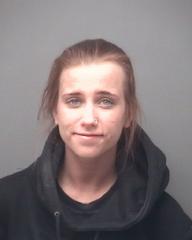 The driver was identified as Galina G. Witte, 19, of Evansville.  Weber detected a strong odor of marijuana. Trooper Michael Finney and his K-9, Boomer, conducted a search of the vehicle and located several blunts with suspected marijuana and a glass smoking pipe. Witte was very lethargic and had slurred speech. Troopers also found one Hydrocodone pill inside her vehicle. After failing three field sobriety tests and submitting to a blood test, she was arrested and taken to the Warrick County Jail for various charges. Witte was later released after posting bond.

Indiana State Police want to thank those concerned motorists and 911 dispatchers who took the time to share and gather information so this impaired and dangerous driver was located and arrested before another serious or deadly crash occurred.