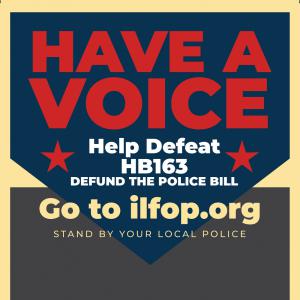 Chokeholds and cash bail would be relegated to the past, and better police training and statewide use of officer body cameras are part of the present and future under a criminal justice package to be debated during the lame duck session of the Illinois General Assembly in Springfield.

The Illinois Law Enforcement Coalition says House Bill 163 as amended would lead to unsafe communities in Illinois.  Local law enforcement has echoed that sentiment leading to local law enforcement agencies in cooperation with state’s attorney’s to release press releases outright condemning it.  Local individual officers have come out on social media saying if HB 163 were to pass they would have to leave their jobs.  At least one officer says “we’re not just asking anymore, we’re to the point of begging for you to voice your concerns.”  He followed that up with a link to a petition he’s asking folks to sign in support of law enforcement.  You can learn more and sign yourself at https://www.ilhousegop.org/support-our-police?fbclid=IwAR16wJhWO-Q_SgjD2D3urRFWSOVrM1NZFlRKL9j5m50TVtB2rLgPRXRpBqk.

Proponents of the measure have brushed aside the law enforcement criticism of the bills as “fear mongering.”

The proposed legislation is broad, including everything from ending cash bail to expanding police training on use of force, crisis training and prohibiting chokeholds.

It also includes requiring the use of body cameras statewide by 2025 (but with no funding to pay for them), the maintenance of police misconduct records and the use of special prosecutors in officer-involved deaths.

Following a committee hearing on the proposal Sunday, State Representative Patrick Windhorst says there were questions raised during the hearing that need to be fully explored.

“What we have before us is a major overhaul of policing and criminal justice in the state of Illinois.  There are concerns that these modifications and changes will increase police liability, discourage people from joining law enforcement, and may result in an increase in the crime rate ultimately after the changes go into effect.  There have been questions raised during the committee hearing that I think need to be fully explored.  There have been issues with the bills that need to be reconciled.  We have two major pieces of legislation with hundreds of pages that have contradictions that are supposed to work together.  What I would prefer is for us to take time with this process to make sure we are fully considering the impact and the unintended consequences and that we look toward strengthening our laws in a way that will keep the public safe and also protect the rights of citizens.”

Another committee hearing on the bill is set for Monday with voting on the issue expected this week.

As is typical Springfield, we were surprisingly dropped with an amendment to HB163, a horrific 611 page “criminal justice reform” bill in the “lame duck” session, with little time to read through or prepare to address our legislators about the horrendous fallout on public safety by their legislative efforts to placate the activists and divisive mobs that promote false narratives in a narrow window before the new legislators are sworn-in. Let’s be clear about one thing: this bill is an attack on law enforcement, law and order, the rights of victims, public safety, and the rule of law itself. First, this bill is unbelievable in the nonsensical attacks on law enforcement officers and how they do their jobs. It would put them in harms way, and subject them to never before seen liability for merely carrying out their duties, anytime they put on their uniform. The focus of those pushing this type of legislation is part of a myopic strategy of staying in power by pitting citizens against law enforcement officers. Second, the bill would result in the end of any form of cash bail and would essentially result in people charged with probable cause of committing serious violent and property crimes being let back out on the street upon arrest, if they’re even subject to arrest at all. To hold someone in custody, the legislation would require the court to make certain findings that could be between difficult and impossible to find. To think that there would be a presumption of pretrial release for someone who is accused of taking another person’s life, sexually violating another person, or other serious crime is preposterous and unacceptable. Third, the bill is an attempt to interfere with legitimate investigative abilities of police officers that goes far beyond what anyone who cares about public safety and law and order would consider rational, reasonable, and allowable under any circumstance.

The various interests of the law enforcement community have attempted to negotiate possible changes to the criminal justice system with members of the legislature; however, this bill makes it appear as though any concerns that were conveyed by law enforcement were ignored while the requests of activists and individuals sitting in think tank cubicles were foolishly embraced. 2020 was an insane year, and 2021 has already been off to an insane start. I honestly thought that the actions that we saw in 2020 by members of Antifa and BLM that included looting and rioting of public businesses, the burning of parts of cities, the death and violence committed against innocent civilians, the occupation of city blocks and government buildings, and the barrage of assaults on other government buildings including a federal courthouse, would be enough for those pushing this type of legislation to come to their senses; it obviously did not. As this was filed before the rioters of the Capitol this week, we can only hope that those pushing this destructive legislation will come to understand that bad conduct, regardless of the political or ideological or partisan beliefs of those responsible for said conduct, should be denounced, and we should not be making it easier for people to commit these destructive acts. If this type of legislation is passed, then do not be surprised if we see a sharper increase in crime than was seen since the last rounds of “reform”.

We recognize and applaud the sponsor and all the legislators who have endeavored to tackle these very difficult issues. Democracy is not static – it is a vibrant process, and their efforts are an important part of all our efforts to have a more perfect union. We respect the efforts of the legislation and while we have concerns with aspects of the proposal, we do not take issue with the well-meant intentions of the effort. Notwithstanding your efforts, the Illinois State’s Attorney’s Association wishes to voice our opposition to House Bill 163 and its many provisions that will profoundly undermine public safety and overturn long-standing common-sense policies and practices in the criminal justice system. The Illinois State’s Attorney’s Association and its members wish to first make clear that it is not opposed to criminal justice reform efforts generally. Rather, we believe that collaborative, bipartisan efforts to make our justice system more equitable, accountable, and even-handed is worthwhile and should be pursued statutorily. However, we are gravely concerned that House Bill 163, sought to be quickly considered and enacted in a “lame- duck” session and days before a new legislature is sworn in, does not afford all stakeholders and lawmakers the opportunity to deliberate upon these issues and give them the reflection that they deserve. Moreover, there are provisions of this bill that are deeply problematic and will only result in further significant increases in violent crime, undermine public safety, and deny justice to crime victims. We do agree that some criminal justice reforms are necessary and in the wake of a year where we experienced an enormous increase in murders and armed carjackings, we are willing to work with the General Assembly in attaining such common-sense reforms. The proposed amendments to HB 163 however, simply go too far.

For our criminal justice system to function properly, those who commit crimes must be held responsible. Since the Bail Reform Act of 2017 became law, we have seen a substantial increase in defendants deciding to ignore the courts and simply not appear in court as ordered, thus avoiding responsibility. The elimination of a cash bail requirement to detain a defendant in favor of detention only when the defendant “poses a real and present threat to a specific, identifiable person or persons, or has a high likelihood of willful flight” would not only exacerbate this problem but would also put the victims of crime and their families at great risk. For example, a serial arsonist who sets fires to people’s homes by law must be released because we cannot specifically identify the person in the home where the next fire will be. A husband who murders his wife must be released because we cannot determine the person poses a danger to a specific, identifiable person or persons. The same applies to heroin dealers, drunk drivers, gun traffickers, and felons in possession of a gun. It would also allow defendants charged with violent crimes like rape and carjackings to be out on pre-trial release. This is unacceptable. In addition, society as a whole is victimized by violent crime, which not only terrorizes and destroys our communities, but also costs taxpayers millions of dollars every year. The proposed amendment to HB 163 also seeks to expand Miranda Rights to anyone in custody on probable cause. Protection of an individual’s Miranda Rights is fundamental when conducting investigations into crime. The proposed amendment however, if enacted, will essentially preclude law enforcement from questioning a suspect once in custody. In the 1963 United States Supreme Court landmark decision in Miranda v. Arizona, the Supreme Court noted that their decision was “not intended to hamper the traditional function of police officers in investigating crime. When an individual is in custody on probable cause, the police may, of course, seek out evidence in the field to be used at trial against him.” The Supreme Court also noted that “The fundamental import of the privilege while an individual is in custody is not whether he is allowed to talk to the police without the benefit of warnings and counsel, but whether he can be interrogated.” Criminal investigations must not be hampered in the name of reform which would occur if this amendment is passed. The proposed amendment to HB 163 also seeks to drastically change Illinois’ murder statute involving forcible felonies. Presently, if participants engage in a forcible felony other than second degree murder that results in the death of an individual, any participant in the crime can be charged with murder and held responsible for the foreseeable consequences of their actions. If passed, HB 163’s proposed change in the law will no longer hold accountable participants responsible for the death unless it can be proven in court that the participant “knew that the other participant would engage in conduct that would result in death or great bodily harm.” This new law would significantly reduce law enforcement’s ability to fully hold participants responsible for violent crimes. These examples only scratch the surface of many of the changes proposed that cannot be reconciled with the average person’s views and expectations for their justice system.