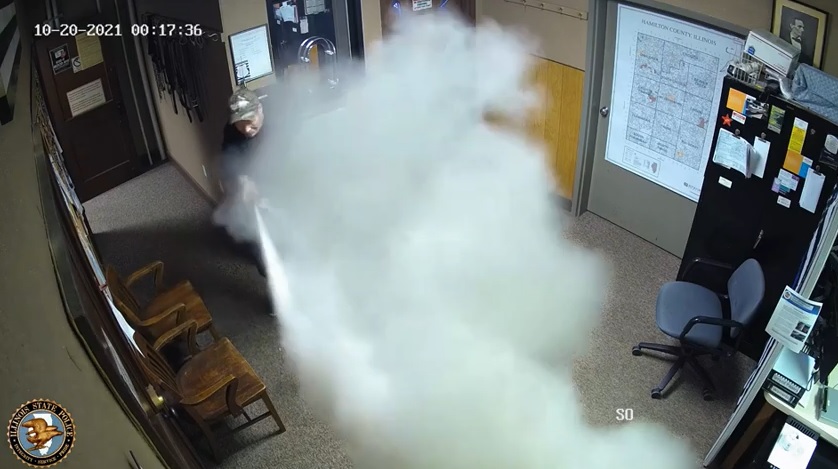 An incident occurred just after midnight inside the Hamilton County Sheriff Department Office on October 20, 2021. McLeansboro City Police Officer Chase Partain arrested Aaron Sealy on felony charges. Aaron Sealy was seated in a wooden chair while handcuffed to a wall. He was able to get the handcuffs loose by unscrewing an eye bolt that was anchored in the wall and jumped up and removed a fire extinguisher from the wall. Sealy discharged the fire extinguisher chemicals toward Officer Partain and Sheriff Deputy Elliott. Both officers told Sealy to drop the fire extinguisher multiple times and to not discharge the chemicals. After Sealy failed to listen to the officers’ commands and discharged the chemicals from the fire extinguisher, the chemicals filled the room making it difficult for the officers to see or breathe. Both officers shot at Sealy and he was hit by one bullet. The officers rendered aid to Sealy and called an ambulance to transfer him to Hamilton Memorial Hospital. Sealy was stabilized at Hamilton Memorial Hospital and then transferred to Carbondale Memorial Hospital. The defendant is currently in custody.

Indeed, reviewing courts in Illinois have concluded that similar devices – that is, devices which are used to incapacitate individuals (including police) – such as pepper spray, are “dangerous weapons”. See People v. Lampton, 385 Il. App. 3d 507, 513-15 (2008) (explaining that the effects of such spray can be “disabling” – leaving victims with “difficulty breathing and their eyes burning.”).

weapon. Objectively, any reasonable officer would have appropriately believed that the prisoner had intent to inflict serious harm that could result in death.

The answer seems clear: the use of deadly force was entirely appropriate. These officers explicitly describe difficulty breathing and burning eyes and potential incapacity (inability to see) when the prisoner sprayed the chemical foam/powder directly into their faces. Such a temporary incapacity could have easily led to the prisoner disarming the deputies and using their service weapons against them – or simply subjected them to bludgeoning by the prisoner with the fire extinguisher itself.

The Illinois State Police conducted the investigation. After the investigation was completed an independent review of the case was handled by the Illinois Appellate Prosecutor Office. The result of that review by Illinois Appellate Prosecutor Office was that the officers acted appropriately. The officers will not be charged in relation to this incident based off the investigation and independent review. The defendant has been charged with two counts of aggravated battery. All defendants are presumed innocent until proven guilty in a court of law.