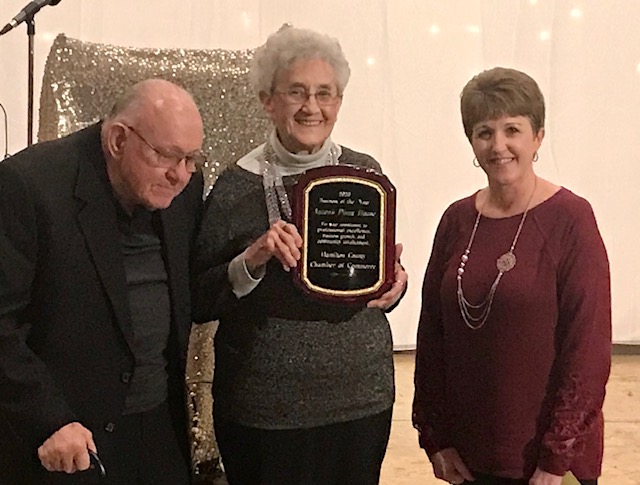 Honoring the past and ensuring the future is the slogan of the Hamilton County Chamber of Commerce.  Around 100 of Hamilton County’s finest gathered Saturday evening to socialize and celebrate some of the county’s most important achievements.  Two awards were handed out; one for the annual Ted Satterfield award and another, the first ever, for Business of the Year. 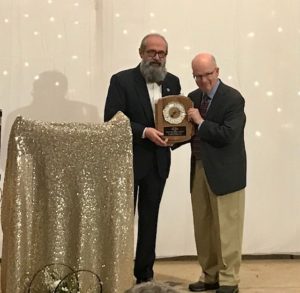 Nominees for this year’s Ted Satterfield Award were Hunt Bonan, Mary Anne Hopfinger, and Kevin Pyle.  The recipient of the Ted Satterfield Award is typically an individual who has demonstrated a commitment to the advancement and improvement of Hamilton County.  Kevin Pyle is the General Manager of Hamilton County Telephone Co-Op for the last decade and served as the plant superintendent prior to that.  Mary Anne Hopfinger is the current County Clerk, a position she’s held since 2006.  This year’s award winner, Hunt Bonan, formed with his brother Bill in 1988 a bank holding company for the purpose of acquiring 100% of the stock of Peoples National Bank.  The holding company was named Market Street Bancshares, as a reference to the location of their family law firm.  At the time, PNB held assets totaling $50 million.  As of last year, the bank boasts assets of now more than $1.2 Billion.  He serves as Chairman of the Hamilton Memorial Hospital Foundation Board, member of the Illinois Bankers Association, a Trustee on the Rend Lake Board of Trustees and on the RLC Foundation Board.  In accepting the honor, Bonan said, “I owe this community everything.  I was blessed with wonderful parents; to be born and educated here and I got started in business here.  To the extent that I can, I hope to be able to continue to support this community in any way possible for the next many, many years.”

The Chamber allowed members to nominate and vote on it’s first ever Business of the Year award.  Nominees for the 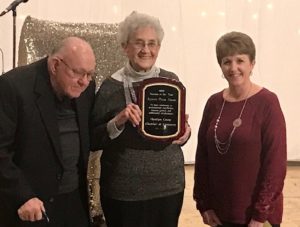 year included Auten’s Pizza House, CounterTop Creations, and Vaupel Home Furnishings.  The winner of the inaugural award is Auten’s Pizza.  For more than 40 years, Dick and Lucille Auten have been supporting the community through monetary donations and volunteer opportunities.  Autens is a big supporter of the school system, summer programs, the Chamber itself, plus Rotary and Kiwanis clubs.  Since 1978, the Auten’s have been serving up regionally famous pizzas at pretty unbelievable prices leading to their popularity not only in southern Illinois, but also gaining them a fandom even states away.  Lucille in accepting the award said, “ya know it’s easy to feel like another donation, another donation, but that’s really what it’s all about…community.  We love this community and we hope to be able to keep serving up good pizzas for many years still yet.  We do take it a day at a time now at our age though.”  Dick added, “If it wasn’t for all of you out there, we wouldn’t be able keep doing it so thank you.” 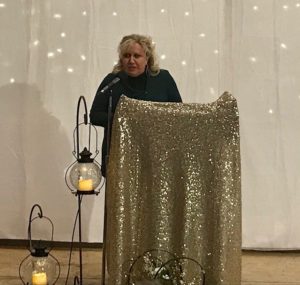 Chamber President Mindi Kolts also talked about the Chamber’s mission, what the group has been up to over the last 12 months and what’s coming up.  Among the most impressive of the Chamber’s efforts was the December Countdown.  Kolts explains, “this is where patrons can shop local and turn in their receipts for a chance to win gift cards.  We gave out $500 in local gift cards.  We didn’t tabulate the receipts from Christmas, but when we did it in July, it was more than $200,000 in receipts.”  And when it comes to what’s coming up, Kolts expressed excitement about an upcoming Banner program.  “One new thing we have coming up soon is we’ll be working with the city to hang banners.  This will provide Chamber member businesses the opportunity to advertise their business, but also share in the pride of our community in welcoming people to it.  You may have noticed similar banners when you drive through Benton or Carmi.  We’re looking forward to offering these to our members 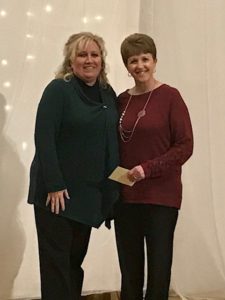 as well.”  Kolts also introduced newly elected 2020 Chamber Board members as Jamie Green, Paula Hatfield, Scott Kolts, and Rhonda Mitchell.  Finally, Kolts said she couldn’t leave the podium without recognizing retiring board member Cindy Anselment.  “Cindy joined the Board in January 2011.  She probably had no idea what she was getting herself into.  About 4 years ago, when the Chamber began to revitalize it’s role in the community, Cindy was right there and ready.  She’s organized and a go getter to say the least.  The changes and improvements we’ve made couldn’t have been done without her.”

The Chamber’s next event is the 3rd annual Ham Co Food & Brew Fest.  WROY/WRUL is the official media sponsor of the event coming up on February 22nd.  The event will be held at Tracker’s Lodge, 208 South Washington in McLeansboro.  Learn more about the event and the Hamilton County Chamber on the organization’s website at www.hamcochamber.org or by calling 618-643 – 9394.  You can also find the Chamber on social media at www.facebook.com/hamcochamber/.