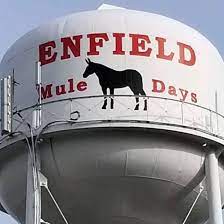 A lengthy session of the Enfield Village Board took place Monday night.  Scott Mareing was there and has this report.

The board approved several resolutions concerning the Water Project.  An amendment to the water ordinance listing the water rates for customers was approved, as it’s needed to allow the village to receive grant monies through the Illinois EPA.  An ordinance was accepted allowing Brown and Roberts Engineering to continue work on the water project due to the fact that the village now has a different Mayor, and an ordinance containing a partial payment estimate with the contractor, Wiggs Excavating, was approved.  Also approved were two separate payments to Brown and Roberts totaling about $10,900, and an ordinance releasing money from the Illinois EPA loan for the water project.

Mayor Pro Tem Maury Black said a 50 foot long culvert will be built under the Hickory Street Bridge and the cost should be covered by road money and be partially be paid for by White County.

Repairs have been made to the dogpen and the village approved compensating Animal Control for food and supplies.

The board approved to pay $600 to the White County Sheriff’s office for dispatch as part of their yearly agreement, which is due by the start of the next Fiscal Year in June.

They also agreed to again this year donate to Enfield Healthcare, $25 each for Christmas presents for each of the 16 residents there.

Power to Enfield is subcontracted by Direct Energy, although it’s done locally through Ameren.  The board is considering having Ameren as their sole source, so the matter was tabled until next month’s meeting so they can look into seeing whether it would be cost-effective to do so.

The board went into Executive Session for one hour and four minutes to discuss Employee Compensation, Animal Control Compensation, and hours worked and insurance for Officer Mark Worlds.  Mayor Black said the board is looking into raises and insurance coverage for all employees, so it was tabled until next month’s meeting to see how the village would be able to fit it all into their budget.