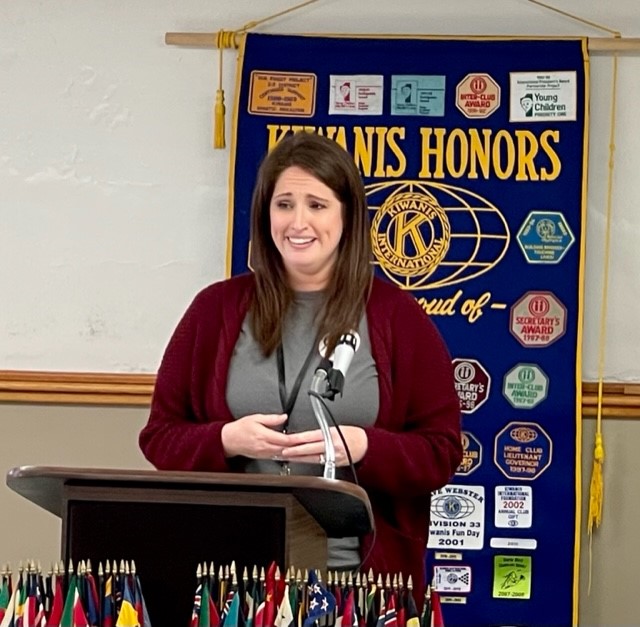 Carlin Smock, a self proclaimed history nerd, history teacher, and 2005 Carmi White County High School graduate was approached to be on the White County Historical Society board last spring.  She jumped at the opportunity and she says that got her wheels spinning.

She says she hoped there would be a dozen or so students that would be interested in joining.  She was positively overwhelmed to get nearly 50 students who expressed a desire to be involved.  One of her favorite things about the club is it’s not competition based.

Smock, along with 7 of her senior students were featured at the Carmi Kiwanis Club Thursday to talk more about the program’s accomplishments and future plans.  Among the students, Kaden Driscoll, Tyler Goemaat, Ebonie Hawkins, Cameron Courty, Bryson Moore, Hannah Swanberg, and Kassi Milligan.  In the fall, the group took part in Pioneer Days which is put on through a partnership between the Retired Teachers Association and the Historical Society.

In October, the group helped with museum supervision so they could be open for tours on Corn Day and the group sent about 80 genuine, heartfelt letters to veterans taking part in the Honor Flight.  She says she hopes to do that again in the spring and even take a field trip so students can be there to greet the veterans as they return to Evansville.

The group also has some exciting plans for the future as well thanks to a grant Smock was able to secure.

Goemaat says as a fellow history buff, he was excited to have the opportunity to join the club and sees it as an important step for not only his generation, but future ones as well.

Keep up with the Carmi White County Historians club by finding their group on facebook here.

In Kiwanis business, it was determined that Pancake Day will again be held in June this year though a date hasn’t yet been decided upon and the fundraiser will again be held at the First Christian Church with dine in or drive thru options.  Up next week at Kiwanis, the club will hear from Lacey Moore in advance of this year’s Cheer for a Cure event.