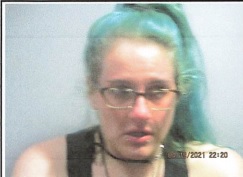 34 year old Carly Smith of Carmi was sleeping when she found herself surrounded by Carmi Police.  Sleeping of course is not a crime, but it turned into an inconvenience yesterday due to Smith being passed out in the Taco Factory drive thru at 10 till 1pm Tuesday afternoon.  Law enforcement, in response, found that Smith’s Indiana issued drivers license was suspended.  She was arrested, booked at the police department where she would later bond out to $250 cash.  Smith is due in White County Court on May 25th for a first appearance.