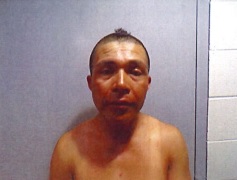 A harrowing escape from what could have turned into a deadly encounter has one Carmi woman advising others to be vigilant even in a relatively safe, small town.  After returning home from work as a nurse at a hospital in Evansville, Jennifer Peerman was allegedly confronted and attacked at her Third Street home.  Carmi Police confirm they have the suspect in custody.  Peerman says she got off work at 7 and came into a dark home and went about her routine including bathing, dinner and watching a few shows before planning to go to bed.  When her cat jumped up suddenly and opened the bedroom door to exit, Peerman said she noticed the door returned shut; something she says isn’t common.  Additionally, she says she heard footsteps.  She called out for her eldest daughter to no reply. 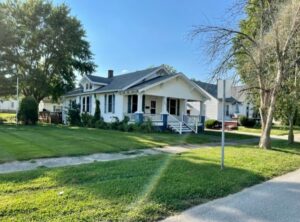 She immediately called her friend Amanda Williams and asked her to stay on the phone with her while she checked the house.  As she walked out the bedroom door, Peerman says she saw the silhouette of a man coming for her with a knife.  Armed with only a fork, a struggle ensued and the perpetrator was able to get the phone away from Peerman as she screamed for her friend to call 911.  At that point, Peerman says she shoved the aggressor and ran from her home looking for help.  Luckily, her neighbor Ginger Mallette answered the door and kept her safe while authorities responded.

Within 3 hours, Carmi Police had their man in custody thanks to being able to ping her phone, which the culprit took with him.  At 12:30am and 1:26am, 911 calls came in from Peerman’s phone which were allegedly made by one of the suspects’ roomates in an effort to turn him in.  The suspect lived next door, is Hispanic, and is believed to have been involved in the incident at Wal Mart recently in which a young woman was potentially targeted or harassed.  Inside Peerman’s home, police found the steak knife, the fork, and a beer on the floor next to the couch in the living room.  While not confirmed, it appears the suspect gained entry into the home through a window.

Peerman says the neighborhood had been a safe one over the last 2 years she lived there, but that she felt something wasn’t right about the neighbors since they moved in a few months ago.  Peerman says she felt they had been watching her.  She’s just glad her children weren’t home.  Peerman signed a new lease for a new home Saturday and is urging others to not assume they’re alone in their house upon arrival saying it’s a good idea to not get complacent and check.

Carmi Police Chief Jason Carter says we can expect a full press release on Monday.  Peerman says when you get home, check your home and turn on your lights. 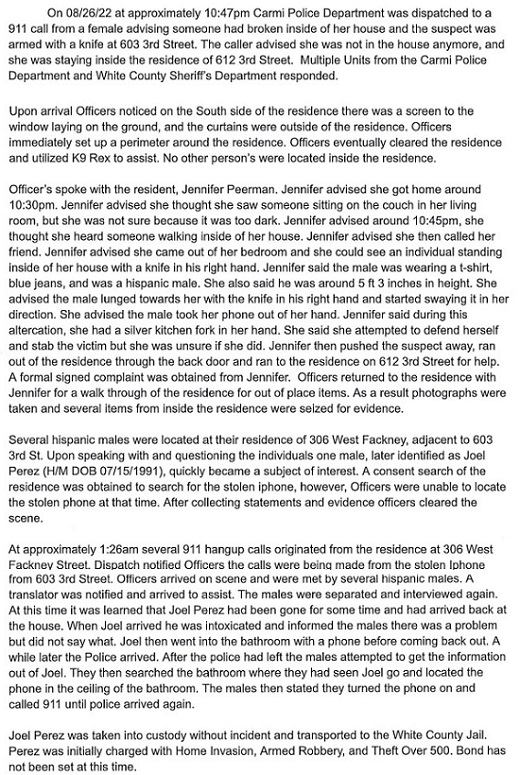