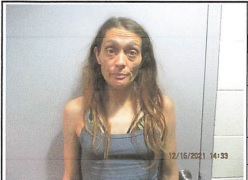 41 year old Tabitha Swango of Carmi is back in the news following her arrest early Thursday morning.  Carmi Police say they found the Carmi woman at her home on 7th Street home at around a quarter after 4am and placed her in custody on a warrant for two counts of felony theft that date back to November 22nd.  She also faces an additional prior.  Bond for Swango has been set at $1,000.

A Grayville woman is also behind bars in the White County Jail following her arrest in Carmi shortly after 7pm Wednesday evening.  38 year old Natasha McKenzie was picked up at a 5th Street home on two warrants, one a driving on a suspended license traffic infraction that dates back to 2019; the other a 2020 Criminal Felony out of Richland County.  McKenzie’s bail has been set at $700 total.